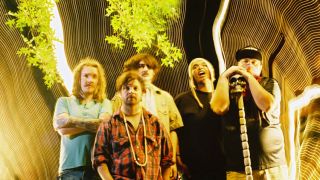 Location: Fort Smith, AR (no, we don't know where that is either)

Intelligence: It's not surprising given the chaotic Pixies meet Black Lips vibe of their music that Robert Bishop, percussionist with Fort Smith's Pagiins is quick to describe their live shows as "Noisy, sweaty, smelly and fun - with a dose of awkward."

As such, Pagiins fit neatly into the mould first formed by the likes of psyched-out US garage pop stalwarts 13th Floor Elevators, but with an authentic slacker punk edge that fans of Wavves, Ty Segall, or the aforementioned Black Lips will embrace whole-heartedly.

If that shameless name-dropping has got you salivating, we recommend you check out their free-to-download first EP, Good Things Take Time, released in April this year. It's six tracks of good-time, summer-tinted thrash-pop and, importantly, the third tune (Potential Foes) opens with the immortal lines, "I'll punch you in the face. ARRRRGH!" before exploding into one of the most noisey, danceable slices of youthful lunacy since Audacity's Teenage Town.

Having formed less than a year ago, the band are growing quickly. Winter-time calls for something a little darker and currently Pagiins' focus is on their second EP, Bad Things Don't, recorded at East Hall Studio in Fayetteville, AR.

Although definitely not lacking a sense of fun and sharing similar influences ("I'm pretty sure Arabian Mountain by The Black Lips and Slaughterhouse by Ty Segall were on repeat around then", says Robert) it's musically a more mature selection, building a better platform for the delightfully unhinged sound of guitarist Aaron Smith's Pixie-esque lead playing and the dual percussion talents of Robert and fellow drummer Damon Tillotson.

They may have two drummers and be growing faster than the obesity rate then, but don't expect the band to be optionally moving into any big spaces soon.

"We always prefer small set ups so the crowd is right next to us," says Robert. "There is a give and take with those performances. A shared energy we all get to feed off of."

Until they can raise the cash to get to Europe, we'll just have to feed off the recordings.*

Further action: Check out the Pagiins Facebook for general info and shows and the Pagiins Bandcamp to hear some music.

*Disclaimer: Do not attempt to eat the recordings.