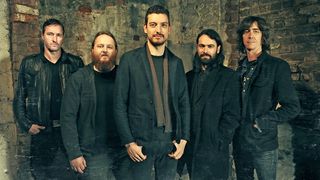 On The Radar interviewees don't usually have four platinum records under their belt, but that's the case with Little Matador's Nathan Connolly, aka 'Nathan from Snow Patrol'.

"I kind of woke up and said, 'I need to make this record,'" explains Nathan. "You get complacent if you don't challenge yourself, and I felt like that was what was happening to me."

Appropriately, the result is light years away from his main band, a far heavier rock 'n' roll affair, more akin to Queens Of The Stone Age or latter-day Arctic Monkeys.

"It's getting back to my rock roots," says Nathan. "Myself and Dave [Magee, lead guitar] were in a band before I joined Snow Patrol, and it felt like we had unfinished business, so I wanted to get back to making the music that I'd started with."

In doing so, Nathan's had to totally rethink his sizeable rig and repackage it for a less predictable club environment. "It's a lot more stripped back," he says. "I'm down to the bare minimum - I have just a Tele Custom, a Diamond Del Fuego combo and a few pedals."

The next challenge is a summer of festivals, including heavy spectacular Sonisphere - not necessarily Nathan's first port of call with his day job.

"There might be a few raised eyebrows!" he admits. "But I really am thrilled that we're getting invited, because it is a world that I listen to and, hopefully, people will judge it on its own merits."