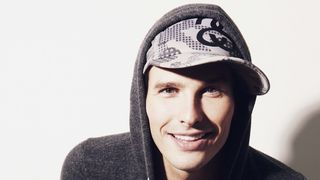 Intelligence: Although Chris Wallace is lighting up the pop charts with his catchy song Remember When (Push Rewind), the singer-songwriter admits that he first had his heart set on being a shred guitar star. "I read all the guitar magazines," he says. "I would study everybody's pictures, and I'd be like, 'I want to be one of those guys. I'm going to be a guitar hero.' I got good pretty quickly. I loved Jimmy Page and Stevie Ray, but then I really got into metal. I became obsessed with reading tabs and learning solos. I even bought a Gripmaster 'cause I read somewhere that I could shred better and faster with it. I was driven."

The Indiana native soon realized that the world had plenty of guitar virtuosos, so Wallace decided to sharpen his vocal skills. Without a rehearsal room to practice in, he made one himself - in his car. "You need a car to go anywhere in Indiana," he says, "and any trip takes at least 20 minutes. That gave me a lot of alone time where I could sing as long and as loud as I wanted. I sang to everything, but Queen was a biggie. I practiced to Freddie Mercury a ton. It was terrific training."

Wallace played guitar and sang in a number of bands, but in 2007, almost on a whim, he produced a demo and put it on MySpace. He went under the moniker White Tie Affair, and within days, he had a number of record label offers. "It was crazy how fast it all happened," Wallace says. "I said, 'OK, I'll go with this pop thing.'"

Eventually, White Tie Affair became a real band ("We were part of the whole Fall Out Boy scene") and scored hits such as Allow Me To Introduce Myself...Mr. Right and Candle (Sick And Tired), but after a few years, Wallace came to the realization that the group had reached its peak. " I had changed, and what I wanted to write about and talk about what had changed," he says. "I had to do things on my own and write my own album."

Wallace's debut solo effort, Push Rewind, is chock full of radio-friendly tracks, and his first single, Remember When (Push Rewind), is already proving to be a winner. He played all the instruments and tackled the lion's share of the production. "The album is me," Wallace says, "whereas with the White Tie Affair I was trying to figure out who 'me' was. I can be myself as a solo guy. Pure, unapologetic pop with heavy beats - that's what I like doing."

Even so, Wallace admits that he plans on incorporating his guitar-playing prowess into his stage show. "I have a bit of Bruce Springsteen and Prince in me," he says. "I like the idea of fronting the band and being the man at the mic, but every now and then I'll whip out a crazy solo. It's cool to shock people and have them go, 'Oh, wow. That guy can actually play!"

Further action: For the next two months, Wallace is will be doing promo dates and performing at radio station holiday-themed shows. Come February, he'll embark on a US tour opening for a big-name act that he says he can't yet reveal. "It'll be fun," he says. "I don't plan on being home for the next year or two."