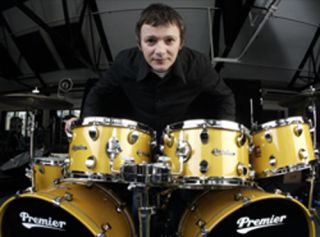 Speaking to Mojo magazine, Noel Gallagher says: "Liam thought we should have got some 16-year-old in. I was like, 'You're ludicrous! I'm fucking 40. I'm not playing in a band with some fucking kid who's gonna be marauding through the first class lounge, throwing heroin everywhere. He's never had free crisps before and he's going mental!'

"No, I said 'We need to get someone who's our fucking age, who's been on big tours', but Liam's still not happy about Chris Sharrock because he's Robbie Williams' drummer. I went home and I thought about it and it was just too much temptation to piss Robbie Williams and Liam off in one phone call."

But Rhythm magazine's editor Phil Ascott thinks Gallagher has done the right thing. "We agree with Noel", says Ascott. "Chris is a highly-respected drummer with the necessary experience of playing the world's biggest stages. Plus it was Zak Starkey who actually replaced Sharrock in The Icicle Works back in the '80s, so their talents are clearly matched."

The new Oasis album is out on 6 October, and will feature the last work of Starkey with the band.