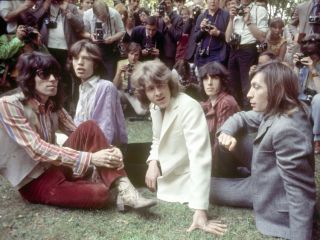 Crossfire Hurricance, a new film about the Rolling Stones' 50 year career, has been confirmed for a UK cinema release this October.

The official documentary is being helmed by Brett Morgen who has previously won a Sundance award for boxing film On The Ropes and, perhaps more relevantly, directed 2001 pop documentary Say It Loud: A Celebration Of Black Music In America, which featured the likes of Al Green, Aretha Franklin and BB King.

Crossfire Hurricane will reportedly feature a large amount of previously-unseen footage of the band - up to 80 per cent of the archive material could be new, said Keith Richards back in March - and will include commentary from all of the current 'Stones line-up, as well as past members Mick Taylor and Bill Wyman.

The band and film-maker are promising that it will cover the group's entire 50-year career "from the Marquee Club to Hyde Park, from Altamont to Exile, from club gigs to stadium extravaganzas".

In a statement, Brett Morgan told press: "Crossfire Hurricane invites the audience to experience firsthand the Stones' nearly mythical journey from outsiders to rock and roll royalty. This is not an academic history lesson. Crossfire Hurricane allows the viewer to experience the Stones' journey from a unique vantage point. It's an aural and visual roller coaster ride."

The film will see a limited cinema release in the UK in October before a television premiere on BBC Two in the UK and HBO in the US later in the year.

Head to the official Rolling Stones site for more information.