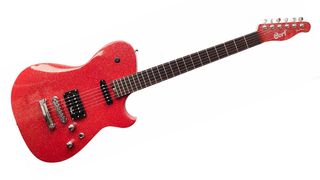 NAMM 2016: Manson Guitar Works has revealed a new Red Sparkle finish option for its popular Matt Bellamy signature model, the MBC-1, and announced a left-handed version is also in the works.

The Muse man's first affordable signature model received rave reviews when it was rolled out last February and, at £500, represented excellent value for money. These expanded options are only good news, especially for oft-overlooked lefties.

Check out our full review of the Manson/Cort MBC-1 and read Manson's press release about the new options below.

The new MBC-1L Matthew Bellamy Signature is the left-handed version of the existing MBC-1. The MBC-1L offers left hand players the opportunity to start playing the multi-award winning MBC-1 guitar with all the features of the current model, but in left- hand format.

In addition a new colour, Red Sparkle, will sit alongside the existing Matt Black MBC-1. Both will have all the features of the existing 2015 model that have made it a huge success to date.

The MBC-1RS - Red Sparkle - is a vibrant and stunning holoflake finish over the exact same red base coat used by Hugh Manson on the legendary Manson Matthew Bellamy MB-1 "Santa" model.

Release dates and final UK prices are to be confirmed.