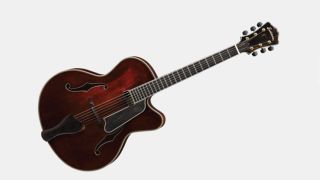 Check out Eastman at NAMM to join in the celebrations

NAMM 2014: Eastman Guitars will be marking its 10th anniversary in 2014, with celebrations kicking off at NAMM in January.

"I am truly humbled by the success of Eastman Guitars in reaching this momentous landmark," said founder Qian Ni. "The growth and impact that we have made in 10 years serves as a testament to the dedication and commitment our designers, craftsmen, and employees have had in following the creative vision and inspiration we had when we conceived our next steps.

"I have long admired the guitar for its aesthetic beauty, the complex simplicity of its mechanics, and its immensely influential role in the canon of musical history. We're excited for what the future holds as we continue one of the most fascinating musical traditions the world has known."