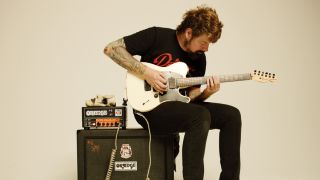 Visit the Orange booth at NAMM and cross your fingers...

NAMM 2013: Orange has gone all Willy Wonka for NAMM 2013 with a Golden Ticket giveaway.

The lucky winners will bag themselves a Signature #4 Jim Root Terror Head, and all they need to do is stop by the Orange booth, grab a giveaway bag and cross your fingers, because every day one bag will contain a Golden Ticket.

For more information visit Orange or stop by booth 4890, Hall C at NAMM.

In celebration of the Signature #4 Jim Root Terror Head winning the UK´s Music Industries Association award ‘Amp Of The Year´ for 2012, Orange Amplification will be giving away four signed amps at this year´s Winter NAMM.

If you find one of these highly sought after Orange Golden Tickets simply bring it to the Orange Music Booth before 5.00pm that day and collect your great prize.

And while you are collecting your Orange Amplification giveaway bag why don´t you check out our incredible products, chat to our staff, and meet some of our endorsees. Artists such as Glenn Hughes, bassist for Black Country Communion, will be appearing at 1pm on Saturday, January 26th and Larry LaLonde from Primus will be on the book at 3pm.

To discover if you have a lucky Orange Golden Ticket come and visit the Orange Music Booth 4890 in Hall C and collect your Orange Amplification giveaway bag.