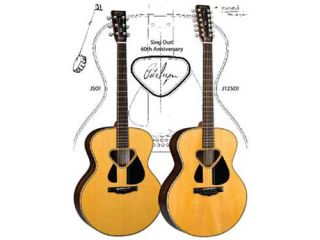 The guitars mark the 60th anniversary of Sing Out!, the magazine, songbook publisher and syndicator of traditional music radio shows that Seeger helped found in 1950. To mark this milestone, no more than 120 of these guitars are being built, signed by both Seeger and Martin Chairman and CEO Christian Frederick (Chris) Martin IV.

For more than 70 years, Seeger has embraced and championed traditional American music, as a member of the Almanac Singers in the 1940s, the Weavers in the 1950s and recently, as a solo artist.

The 6-String JSO! and 12-String J12SO! are inspired by Seeger's personal 12-string guitars, the first two of which were custom built by Liverpool luthier and engineer G. Stanley Francis; with later, evolved versions crafted by Connecticut luthier Bruce A. Taylor.

The headplate includes the familiar gold C. F. Martin & Co. logo, as well as a banjo sketch drawn by Seeger and a replica of his signature inlaid in mother of pearl. The unique and distinctive triangular sound hole is surrounded by a black/white/black/white fine line rosette, and the top of the sound hole is encircled by bold herringbone purfling and grained ivoroid binding.

Both models are finished with a polished gloss lacquer finishes, with aging toner on the tops to enhance their vintage style and are protected in Vintage Series Geib-style™ hardshell cases.

Each of the limited edition (120) custom guitars will be numbered in sequence with the edition's total number produced.

Since 1950, Sing Out!'s mission has been to preserve and support the cultural diversity and heritage of all traditional and contemporary folk music, and to encourage making folk music a part of our everyday lives.