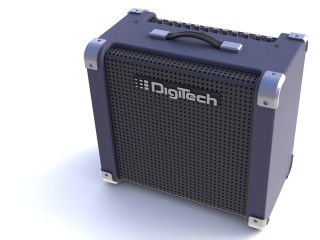 NAMM 2011 PRESS RELEASE: Expanding into an entirely new product category, DigiTech today announced the introduction of its first-ever guitar amplifiers. On the back of renowned amp and effects modelling experience DigiTech are proud to introduce the Fusion Series of modelling guitar amplifiers.

"In creating our DigiTech amplifiers, we knew we had to offer something more than a 'me too' product line in a market already filled with amps," stated Rob Urry, President, Harman Music Group. "DigiTech has the unique advantage of decades of experience in creating many of the world's most recognisable sounds, effects pedals and products, and we put all of that expertise into designing a line of amplifiers that provide an exceptional range of tones."

All Fusion models feature a built-in chromatic tuner, an MP3/Aux input and a 1/4-inch headphones jack. The 75XD and 150XD also add a USB port that lets users connect to a computer and edit the amp's presets.

The DigiTech Fusion Series will ship in Spring 2011 with pricing to be confirmed at time of writing.