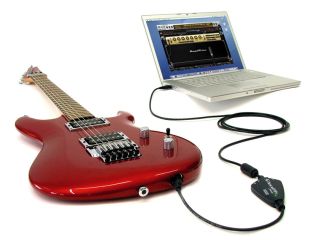 IK Multimedia's AmpliTube products have grown steadily in popularity over the years.

Guitarists and hi-tech musicians used to be uneasy bedfellows, with neither group having much truck with the other. Right now, however, they seem to be getting on famously.

If you've checked out our NAMM 2008 show report - and if not, why not? - you'll have noticed that several of the new products launched there fall into both the Guitar and Tech categories. Whereas once these worlds were apart, now we're seeing them coming together.

Predictably, it's technology that's behind this convergence. Computer technology to be more precise. In the days before hard disks, computers were only good for musicians who wanted to sequence external gear (synths, samplers and the like), but today's mammoth, super-fast drives enable you to record and store all the 'real' audio (guitar or otherwise) you want.

And then there's the issue of processing power. Once, computers scarcely had the CPU strength to run a single effect plug-in, but these days, your Mac or PC can emulate a complete rig of guitar gear without breaking a silicon-based sweat.

More and more companies are taking advantage of this additional power, with IK Multimedia, Overloud, Peavey and Zoom all showcasing new guitar processing software at NAMM.

I don't think it's just the technology that's changed, though - I sense that attitudes are changing too. Guitarists might not have been outright scared of computers in the past, but they were certainly wary of them. However, software such as Apple's GarageBand has opened up their eyes and imaginations to the boundless possibilities that computer-based production affords.

This isn't a one-way thing, either. My hunch is that new 'guitar technology' products are empowering computer-based musicians too, encouraging them to pick up the instrument for the first time and start experimenting with it.

With any luck, the upshot of this cross-pollination will be lots of interesting, inventive music. Guitars plus technology doesn't have to equal Jesus Jones, after all - let's hope not, anyway...