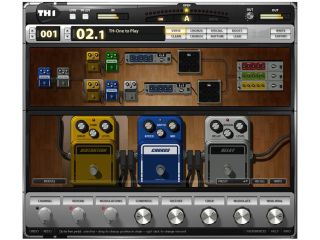 Although it's only a few months since Overloud released its first product, the BREVERB modelling reverb plug-in, the company has now announced its new TH-1 software, which promises a new user experience in guitar amp and effects modelling.

The TH-1 models 15 different amps, 15 cabinets, and 15 different mics, and much like its peers, it allows virtual 3D placement of mics relative to the cabinet and the virtual room.

An interesting feature is the innovative Smart Control strip which enables control of more than one parameter at once, so sounds can be drastically changed simply by turning a virtual pot. There is also a 'morphing' function, which allows users to morph between amp sounds to create something unique.

The user environment is graphic and is designed to give an 'at-a-glance' view of the signal chain and effects layout. What's more, the Smart Control strip and preset changes can be fully automated within a host sequencer, or via MIDI - so guitarists could plausibly use TH-1 live with a MIDI foot controller.

The TH-1 is released in Q2 2008, and price is TBC. Similarly, details on plug-in format are not available, but the company's BREVERB plug-in is available for VST and Audio Units, and it is almost certain that the TH-1 will function as a standalone.