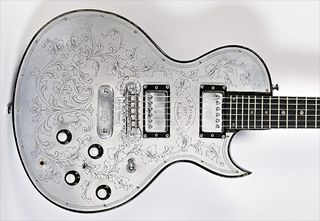 If you are a guitar player, you simply haven't loved until you've gently cradled a good pre-CBS Strat. You've known no happiness like a few stolen moments with a pre-war Martin D-28.

And so, we bring you part two of Guitarist magazine's definitive list of the 50 guitars you need to play before you die - the Father, Son, and Holy Ghost of guitar worship. They're in no particular order, and the best news is that price-wise, there's something here for everyone.

Just imagine seeing the big white light come closer, then realising you never took that chance to wrap your arms around a Collings CJ's waist. It's too unthinkable for words, so you'd better get to work, pronto.

Where possible, we've linked to reviews of the instruments on MusicRadar, and included more affordable mid-price and budget equivalents for the higher-end and rare vintage models.

Missed part one? Check it out here…

Don't you wish you were rock 'n' roll enough?

Hand-made by the late Tony Zemaitis, his guitars have been used by Ronnie Wood, Keith Richards, James Honeyman Scott, Rich Robinson and Gilby Clark. We are not worthy.

Played Hawaiian-style across your lap, a sensitively built example using solid koa makes among the most majestic noises you'll ever hear coming from six strings.

Known for decades as a straight-up, reliable, well-built guitar, the FG series is a staple of the acoustic world. If acoustic guitars were food, the FG series would be rice. The 730S is the pick of the range. (Click for review)

Extended cutaways, the monkey grip, a brace of DiMarzio PAF Pro pickups and lion's claw rear bridge routing make the ultimate shred guitar. No Vai lover should be without one: the bee's knees.

The hardest stringed instrument of all

If you find 'normal' playing a challenge, feel better by trying one of these. There are four knee levers and eight foot pedals (more if you want them!) even before you've tackled either of the two 10-string necks. Think Physics Degree: The Musical.

Pioneering the super guitar genre proper, the Fly Deluxe offers regular electric guitar and piezo-acoustic sounds. Incredibly light too - around 4.5 lbs - thanks to its wooden core with carbon-epoxy exoskeleton. Feel it, believe it.

Twice as much fun

Sonic Youth amassed an arsenal of cheap and undesirable-in-the-eighties Jazzmasters to cope with their library of tunings, etched into their headstocks… only to have them stolen in 1999.

The original folk guitar and still the boss

This small-bodied mahogany acoustic spits out a tone that instruments half as big again would do well to achieve.

With this totally unique take on mixing standard electric and electro-acoustic sounds, Taylor continues to push musical boundaries with confidence and credibility. Give your playing a stylistic kick up the backside. (Click for review)

When 440Hz is not enough

Baritone guitars are universally regarded as cool instruments and, long before downtuning was considered the domain of the metal fraternity, baritones were employed to fill the sonic gap between the guitar and bass. Perhaps most notably they were used within the surf music genre, but pop up everywhere.

The Dano '63 is the current model from the company that actually invented the modern baritone, and alongside the guitar's traditional look, you have a rounded, fat tone that will certainly shake both the windows and your creativity.

Absolutely everyone reading this should own one of these guitars.

The voice of Bossa Nova

The great João Gilberto and Tom Jobim played these. Their unique oval soundhole construction creates a special tone that is part of the heart and soul of Brazil. Vintage ones are hard to find in Europe, so good luck!

Custom tone on the cheap

Squier gene-spliced the Fender '72 Tele Custom and Deluxe, offering either fulsome humbuckers or punchier P-90s. These budget beauties punch far above their weight. Awesome necks, too. (Click for review)

Your realistic chance to get that Gypsy sound

Getting your hands on a pukka Maccaferri is less likely than being able to play all Django's stuff… two fingered. John Jorgenson ticks both boxes, but everyone else should try this for a credible Gypsy jazz starter. A unique sound and feel: Djangtastic.

No frills but great build from this UK stalwart. Takes the Gibson Junior vibe, but with a range of popular options and upgrades. A tone machine with minimal damage to the cash machine.

The butterfly to Frankenstein's caterpillar

Like any history-changing moment, every EVH fan will remember exactly where they were the first time they saw one of these in 1990. It had a new body shape topped with stunning quilted maple, but the real joy was that drop-dead birdseye maple neck; beautifully comfortable and satin-finished, just ready to rip up and down on.

It was a radical evolution for what we'd come to know as Eddie Van Halen's axe. Refined, yet still a rock animal.

There was a time when a Jackson was the only heavy rock guitar to have. Crazy finishes, Kahler locking vibratos (later Floyd Rose), crazy necks… You just weren't alive if yours wasn't pink and screaming.

Arguably the pinnacle of Anderson's skills, this is electric guitar building at its finest: form and function fuse seamlessly and tonefully in this unique single-cut, not least for the compound wedge neck joint.

Clever Godin - an electric nylon-string with an inviting neck, plus a MIDI pickup. With an amp with piano/string MIDI sounds, Tears In Heaven sounds fresh again!

Fireglo or firewood? You decide…

It shouldn't have worked but it did! Twice as many strings and super-tight string spacing, but this beauty goes way beyond Mr Tambourine Man. The theme from Crossroads is just not the same without it.

And your bird can sing…

Had it not been for three Liverpool lads, the Casino would languish, like its Gibson sister model the ES-330, as a forgotten sibling. In the hands of McCartney, Lennon and Harrison, however, it gave us Revolver!

It's all in the neck

Among the myriad options afforded by James Tyler, the Studio Elite has to be the jewel in the crown. What is common across the board is the wonderful neck, offering that heady mix of comfort, feel and subtle shaping, but what strikes us is the sheer vibe of the thing.

Ignore the bizarre finishes and 'unique' headstock: it has the best neck of any contemporary guitar we've ever played and it sounds amazing, especially if you go for the available onboard mid-boost preamp option. (Click for review)

Ready for a melon twisting?

Played by the two-brained jazz crazyman, this duplicitous beastie splits three bass and five treble strings to separate outputs. Add a fanned-fret fingerboard so each string has a different scale length and you're… confused. Bonkers.

The much-coveted single-cut Junior was produced from 1954 through to mid-1958, when the equally cool double-cut version was conceived. A slab Honduran mahogany body and chunky neck with Brazilian rosewood fingerboard provided a resonant platform for the single dog-ear P-90 single-coil and one-piece wrapover bridge.

Raw and rock 'n' roll it's been used by numerous players from Mountain's Leslie West to Green Day's Billy Joe Armstrong. Not bad for what was conceived as a sub-100 dollar 'student' guitar.

Now read 50 guitars to play before you die: Part 1