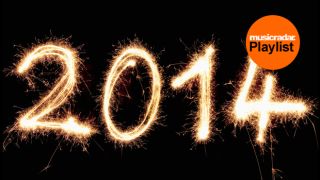 With the festivities of Christmas and New Year behind us, it's time to start facing up to the reality of 2014.

To help you soothe those January blues, here are a few of the artists that the members of team 'Radar are hoping to see big things from over the next twelve months.

McMorrow made his name with 2010's folky Early In The Morning, but recent release Cavalier - which, with its soulful Rhodes, sounds a bit like James Blake but with more heart - hints at something rather more interesting to come in 2014.

The song, along with another track, Red Dust, was made public ahead of the arrival of second album Post Tropical, which will be released on 10 January. (Ben Rogerson)

Look, guitar bands, I know it's been a tough few years, but all you need to do is write good songs. Like Circa Waves are doing. Yes, it's all very Strokes-y and derivative, but honestly, no one cares if it's as furiously, fuzzily danceable as Good For Me. More of this sort of thing, please. (Rob Power)

Manchester based producer Ryan Hunn (aka Illum Sphere) has been steadily releasing music and DJing since 2009, chalking up impressive EPs on labels like Martyn's 3024, Pinch's Tectonic and Young Turks. With his debut LP, Ghost Of Then A Now, due for release on Ninja Tune in February, 2014 looks set to be the year he finally makes a significant impression on the dance music landscape. (Si Truss)

He's been bubbling under for a long time, but with his debut album due in February I'd put good money on it that he'll be all over the place by the end of 2014. He appears to have put his whole family, including Nan, in the video for Home as well, which gets a massive thumbs up from me. (RP)

Talk about an overused word: heavy. This band's heavy, that band's heavy - everybody's freakin' heavy. But they're not as mean, whacked-out and old-school ginormous as Baby Godzilla, a four-piece from Nottingham, England, who don't just play music - they brawl with their instruments like they're in a cage match. A Good Idea Realised is from their recently issued EP, Knockout Machine, and both titles are apt. With any luck, the world will pay attention to these fine young monsters in 2014. (Joe Bosso)

Producer Lewis Roberts has already made quite an impact over the past few years with his gorgeous, often near beatless brand of melodically rich electronic music. He's a debut album proper due via Young Turks some time this year, and although the short clip above is all we've heard of the work in progress so far, our hopes are high for something fairly special. (ST)