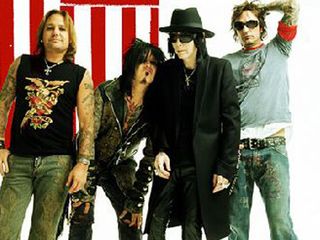 Against all odds, Motley Crue are still alive. Not only that, they've put out their freshest album in years, Saints Of Los Angeles, a bracing reminder of what made this fearsome foursome the kings of the Sunset Strip back in the day.

Central to the mix is Mick Mars. While he's never shown up at the top of guitar polls - in fact, he's routinely placed near the bottom - his blues-based playing, without a trace of shred flash, has provided Motley Crue the kind of king-sized riffs that have made their repertoire amongst the sturdiest in all of hard rock.

MusicRadar spoke with Mars about his approach to the guitar. The 57-year-old Mars (real name Robert Alan Deal) was remarkably candid about his abilities on his instrument. And on the subject of his debilitating disease, Ankylosing Spondylitis (an incurable condition in which one's bones actually fuse together), he didn't hold back a thing...

Despite the success of the band, you're never celebrated for your guitar playing. In fact, the opposite - people rag on you.

"I never got in this to be the fastest guy around. I love the blues, man. I know it's a hip thing for a lot of people to say, but I was lucky enough to hear the blues early on. Right about the time I was starting high school we moved from Indiana to Garden Grove, California, which had a real diverse mix of people: blacks, Mexicans, and us! [laughs] But there was all this different music, such a wide variety. I started hanging out with a pretty cool crowd and they turned me on to R&B, funk, soul, gospel even. The music they loved became the music I loved.

"But the thing I loved the most was the blues. The Paul Butterfield Blues Band's first album, that record spoke to me like a secret language only I could understand. Songs like Born in Chicago and Thank You Mr Poobah - that was the shit. Walkin' Shoes, Got My Mojo Workin'…what a great album."

I imagine you liked Michael Bloomfield.

"Oh, yeah. I followed him from when he played with Paul Butterfield until he formed the Electric Flag. But then he started getting too country-fied for my liking. But still, I'm really into the blues. That's what I love, that's what I listen to."

Still, you are maligned in the music press - you've been called a bad player, a terrible player even. During the late '80s and early '90s, you and CC DeVille alternated winning Worst Guitarist in practically every poll.

"I don't think people realize that the music they hear coming off the stage is me. People try to tear me down, break me - I don't care. Sooner of later they're going to figure it out. Guitar playing isn't about how fast you can make your fingers go; it's about making music. There's tons of guitar players better than me. I know that."

Do you feel sometimes that you should've stayed with straight blues instead of getting into hard rock and metal?

"This is a really difficult one for me, 'cause I sometimes feel I should've been true to myself and stuck with the blues. All bullshit aside, George Clinton, Bootsy Collins, Paul Butterfield, Mike Bloomfield, Alvin Lee, Jimi Hendrix - that stuff was the total shit to me. Don't even tell me about Ace Frehley and that kind of stuff. Fuck man, that stuff sucks."

Let's talk about your medical condition. It's pretty serious.

"It's no walk in the park. In fact, it's why I kind of walk like Frankenstein. [laughs] The thing about Ankylosing Spondylitis is, it's caused by a gene; you first start noticing pain in your hips, usually when you're in your teens. What it does is it slowly fuses your bones together - your spine, your ribs…With most people it stops in their 30s, when the disease is still in their lower back.

"In my case, I have a rare form of the disease that hasn't stopped, so it's all the way up my whole back and into my brain stem. It's literally squeezing my rib cage together, so I've lost some height. And now that it's up in my brain stem it's hard for me to move my head in any direction, be it up and down or sideways. So I can't drive, I can't do any of that kind of stuff - this isn't a 'boo-hoo', it's just the facts."

But if anybody's entitled to a good 'boo-hoo', it's you.

"I'm going to get an operation at some point. There's no cure, but the doctors say they might, might be able to chip away some of the bone growth at the brain stem; it'll still grow back but I'll take any improvement. If I could just move my head a little and stand up straight, I'd be a happy man."

This hasn't affected your hands or fingers?

"Nope. It's not in my hands or finger joints; I can be thankful for that. We really, really, really have to get going on stem cell research. It can help so many people - people in wheelchairs, spinal injuries, osteoporosis. There's so many diseases and conditions we could stop in their tracks if we just got serious."