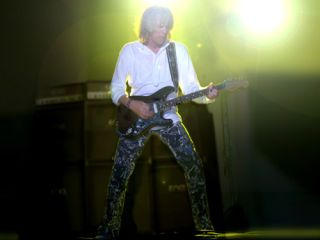 PRESS RELEASE: With just over two weeks to go until Music Live 2009 at the NEC, organiser Clarion Events has revealed a host of attractions for rock-loving visitors over the weekend of 6-8 November…

Thin Lizzy's Scott Gorham and Cradle Of Filth's Paul Allender are two of the special guests recently confirmed. The guitar legends will be appearing courtesy of Engl amplification for meet-and-greet sessions with fans during the weekend.

On the Live Stage, hotly-tipped UK rockers Cars On Fire and They Fell From The Sky (featuring Hundred Reasons frontman Colin Doran and Pitchshifter drummer Jason Bowld) are set to whip up the crowd on Friday 6, while Saturday 7 November sees legendary axeman Bernie Tormé (Gillan, Ozzy, Mammoth) take to the stage with GMT alongside bassist John McCoy and drummer Robin Guy.

The Live Stage rowdiness culminates in the Titans Of Tribute show on Sunday 8, when Music Live recreates the classic Donington Monsters of Rock line-up from 1988 in tribute band form. Hulloween, UK Guns N' Roses, Megadeth UK, Yankee Rose, Dressed To Kill and Hi-On Maiden are set to raise the roof and show visitors how cover tunes should be done…

With the Hellfire Festival (taking place on the Music Live stage each evening of the event) having confirmed a varied line-up covering everything from Saxon, Fields Of The Nephilim and Anvil to Sylosis and Blakfish, the tenth Music Live weekend is set to be the most exciting and inspirational so far.

Joining the host of brands exhibiting at the event this year, Ibanez returns to Music Live to show the latest in its line of world-class guitars and basses. Elsewhere, from PRS, Aria and Dean to Roland and Rotosound, countless thousands of instruments, amplifiers, effects and accessories will be on display for visitors to get their hands on. And the involvement of the show's retail partners means some very special Music Live deals during the weekend.