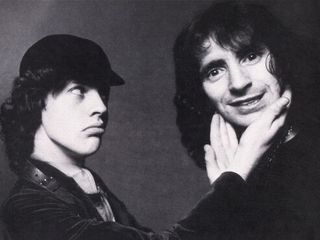 Nearly 30 years after his death, the wild life of AC/DC singer Bon Scott is on its way to the big screen.

The yet-to-be-titled movie is still in the early stages of development. Filmmaker Eddie Martin is still conducting research for the script, meeting with friends of Scott and the late singer's wife, Irene.

According to Undercover.com, Australian actor Tom Budge is the front-runner for the part of guitarist Angus Young, but Scott is yet to be cast.

Books about Scott said to be inaccurate

Through his research and conversations, Martin has learned that Scott's friends feel none of the many books written about AC/DC accurately reflect Scott's story. "Obviously we have gone through most of them, but talking to Bon's friends, they aren't happy with the books and feel they have been misrepresented," he says. "We want to go much deeper with the movie."

Martin says shooting for the film will likely begin within the next 18 months, but it will probably be three years or more before the movie is actually released.

One person Martin is especially eager to locate a former girlfriend of Scott who went by the nickname Silver. "She is definitely the one person we want to find," he says. "She was an Adelaide girl who lived with him in London after he broke up with Irene."

Liked this? Now read: 12 best amps for heavy metal and The best electric guitars under £300