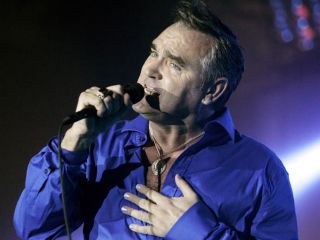 Those Morrissey collections, coming this fall from EMI/HMV/Parlophone, are titled The 7" Singles '88-'91 and The HMV/Parlophone Singles '91-'95.

You'd figure that most artists would love nothing more than for fans to snatch up any and all bits of catalogue. Not the Moz, who says he won't make a dime off such reissues. Furthermore, he claims that he hasn't been asked for approval for their release.

On the fansite True To You, Morrissey says the following:

"Morrissey would like it to be known that he has not been consulted by EMI/HMV/Parlophone with regards to two forthcoming boxed sets of Morrissey singles. Morrissey does not approve such releases and would ask people not to bother buying them.

"Morrissey receives no royalty payments from EMI for any back catalogue, and has not received a royalty from EMI since 1992. Morrissey also does not approve of, and was not consulted on, the Rhino box of Smiths CDs, or the Warner releases of Smiths LPs on 180 gramme vinyl.

"Morrissey last received a royalty payment from Warners ten years ago, and, once again, he would ask people not to bother buying the reissued LPs or CDs."

This isn't the first time Morrissey has asked his fans to boycott product. In August 2008, the singer called a Warner Music DVD titled Morrissey Live At The Hollywood Bowl "appalling" and appealed to his audience to not purchase it.