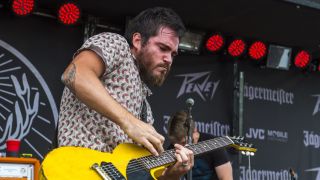 "Going from a duo to five guys on stage really lets me be a guitar player again," says Lopez. "I can even not play sometimes." (Image credit: Â Chris Schwegler/Retna Ltd./Corbis)

Thirteen years ago, singer-guitarist Zack Lopez had it made: Along with his childhood friend Sean Stockham, he formed the hotshot band Leisure, snagged a big-ticket record deal from Dreamworks and moved into a cozy Hollywood Hills pad. Life was good and would only get better.

Only it didn't. A revolving door of unworkable band members and creative differences with their label resulted in two albums recorded and two albums shelved. By 2003, Leisure was kaput; Lopez and Stockman went their separate ways and found day jobs.

"It was difficult," says Lopez, who went to work for his brother's contracting business. "Things came to us so fast the first time around. We were young, so we didn't even register what we were was in the context of something special. I knew that Sean and I would eventually do music again; the only question was 'when?'"

By 2006, Lopez and Stockman were back at it as Middle Class Rut, only instead of dealing with all of those pesky additional bandmates, they formed a powerhouse rock duo based around the same instrumental paradigm crafted by Local H, the White Stripes and the Black Keys. "We did it out of necessity," says Lopez. "If we would've had a rad bass player, we probably would've gone the traditional route. But this has worked out pretty well."

Middle Class Rut issued a psychologically thorny, hyper-aggressive debut, No Name No Color, in 2010, and last month they followed it up with a quirkier, more polished but no less imposing affair, Pick Up Your Head. To replicate the experimental nature of the new album live, Lopez and Stockman are back to their old tricks and are playing as a five-piece. "If that keeps people guessing, then I'm happy," Lopez says with a laugh. "The last thing we want to be is predictable."

Is the band still a duo? You have three other members on stage now.

"Yeah, I think so - it feels that way, anyway. We recorded the new record as a duo, so these guys are a by-product of us making an album that was impossible to play live as a duo. We had to get some guys to fill this thing out.

"Plus, we wanted to shake things up. I think we were getting to that point, so it feels good to have a new dynamic. And to be able to play these new songs and have them sound like the record - oh, man, that's been awesome. If we had five guys and it was a mess, we'd probably go back to two, but right now, it's working out."

In taking on the new members, did that give you pause for thought, like, "Oh, we're now a traditional band"?

"I think I was more bothered by how many two-piece bands I've been seeing over the last year of our first record cycle. It always seemed like cliché. And promoters would jump on it and be like, 'Oh, you're a two-piece - let's pair you with a bunch of other two-piece bands!' It became this whole stale batch of two pieces, and it lost anything that was special about it. When we started doing it, I feel as though we were special, like we were doing it in a way that hadn't been done. Now it's like the two-piece band is the traditional band, so we were like, 'Fuck, let's have a five-piece and be different!'"

"Since we got started, the two bands that have been in our ears have been Local H and the White Stripes. Now it seems as if every other fucking band is a duo. Seriously, every other band is a two-piece nowadays. It's a cliché. Local H were a rad band; they were one of the rock duo pioneers from way back. They were doing it in the grunge era. Actually, it took me a while to even realize that Local H were a duo - their sound was so big and full."

With the five-piece band, have you altered the guitar-amp setup you were using before?

"I've changed it drastically. For whatever two-piece you're in at the time, you have to customize your own rig to your band. I had a pretty deep rig - it was the same amount of gear that we have for all the guys now. I kept my basic sound because I didn't want to come off as if we were a different band - that was never the idea. More or less, I've scaled things down.

"We tried to play with other people before when I was using my old rig, and it was just a mess. I was running two guitar amps and one bass amp, but I'd also have a bass player and another guitar player. At some point, if you all try to play the same chord, it's just a disaster. It was too, too much.

"Now, instead of trying to overpower everybody, I took it way down. I have a basic guitar rig, and I let the other guys fill out the sound; they're doing all the stuff that I used to do. Essentially, we're splitting the same sound with more people."

Are you still using your Les Paul Junior?

When they were two: Lopez and Sean Stockman on stage in Atlanta, GA, 2010. © Robb D. Cohen./Retna Ltd./Corbis

Did you modify it in any way to play as a two-piece?

"It came with the stock P-90s. I took out the bridge right away and put one of those Badass bridges on it - that was a big help. The neck is the only other thing that isn't standard. It's got an extra-fat profile neck on it; the thing's like a tree trunk."

Dave Sardy mixed the new album. What was it like to work with him?

"Man, that was a mixing relationship that can only happen in 2013. It was all done with us in different places - we never even met the guy. [Laughs] We've always been a big fan of his, and we wanted a guy who wasn't afraid to make the record sound a little fucked-up. When we heard his first mixes, we were like, 'Whoa! This is the direction we want the record to go.'"

Speaking of "fucked-up," on the song Born Too Late, you have quite an insane racket going on.

"That's a mess, man. I was trying to do mixes of it for the demo, and eventually I got to the point where I couldn't keep turning things up. It started out with no live drums on it, just this weird percussion beat. It was me hitting the side of a wooden desk with the edge of a computer printer; it created this industrial kind of Nine Inch Nails beat. Then Sean put another beat over it, and it turned into this wall of fucking… I don't even know what it is, but it's cool." [Laughs]

The song Leech has more of a bass-driven sound. Was it built from the bass up?

"It's funny: If you're a really awesome bassist, you can just skate around the neck and not worry about the tone too much - because you're so good [laughs]. I like a really mid-rangey, buzzy tone, sort of like Duff McKagan's sound. He has a cranky, chorus-like, gritty thing. Sardy mixed the song like that. It started out more guitar driven, but once he EQ'd the bass and slammed it up the middle really heavy, that's how it came out. But it was a bass being played through my old guitar rig."

What kind of bass do you use in the studio?

"I use a Lakland. They're these super-expensive basses that a few guys use - the guy in 311, the guy in Papa Roach, a few others. We did the second half of the record in the studio that Papa Roach owns, and that guy endorses Lakland. He had about 50 basses in there, so I found one that I really liked. It made about 50 percent of the record."

How much of the album is the two of you playing live? I get the feeling it's not a lot.

"It's probably 50/50. A lot of the record was based around these percussive beats that were happening, and then it was 'All right, now we'll put the live element on top of that.' We still played together and jammed on guitars and drums, but it was within the confines of those weird percussion tracks."

In working with the full band, because you don't have to make all the sound yourself, are you now able to be a more nuanced guitar player?

"Yeah, yeah. Doing the duo thing, there was only so much I could do since I had to be the bass player and guitar player. My real guitar playing kind of took a backseat. Going from a duo to five guys on stage really lets me be a guitar player again. I can even not play sometimes, which is huge for me. I'm using my effects smarter and playing lead lines - it's all opening up."