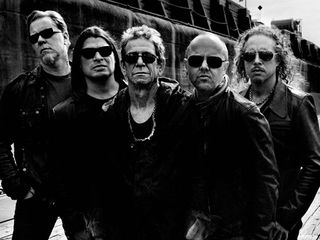 If there is, indeed, no such thing as bad publicity, then Metallica and Lou Reed can rest easy, as they've certainly gotten a boatload of it during the last few months of 2011 with the release of their almost-universally panned collaborative album, Lulu. (Although we loved it - check out our review.)

The just-released video for the song The View might change a few minds. Maybe. Directed by Darren Aronosky, noted for such daring films as Black Swan, The Wrestler and Requiem For A Dream, it's a gritty, black-and-white knockabout affair, with the members of Metallica grinding it out in a way they haven't done in ages.

And check out those close-ups of Lou! Flashbacks? Voices in his head? Or maybe he's having a vision, the kind known only to guys named Lou Reed.

Apparently, the original plan was for Aronofsky to shoot a video for the track Iced Honey, but when director, Metallica and Reed met up in San Francisco, a last-minute switch was made.

"The first time I heard The View I was stunned," said Aronofsky. "I had never heard anything like it. Half was all Lou. The other half all Metallica. It was a marriage that on the surface made no sense, but the fusion changed the way I thought about both artists and morphed into something completely fresh and new. I couldn't stop listening to it. Lou's crushing lyrics, and the band's incredible licks. It's so original and that's why I wanted to work on it."