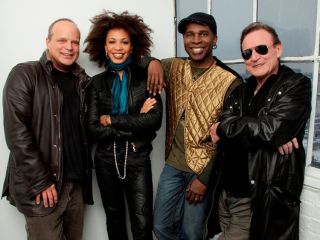 Are you ready for another supergroup? If the answer is 'yes,' then you're in luck. The recently formed Spectrum Road features members from Cream, Living Colour, Santana and Medeski, Martin and Wood.

The group consists of Jack Bruce on bass and vocals, Vernon Reid on guitar, John Medeski on keyboards and Cindy Blackman-Santana on drums.

"To be able to play and record in this band alongside three of the most creative and stellar musicians in the world is a longtime dream come true," Reid said in a release. "The idea for Spectrum Road first came about in 2001, and it was the ongoing belief in the kind of record we knew we could make together that made it come to fruition."

The group has played live on several occasions, and this June they'll perform at the Bonnaroo festival on 9 June. The band's self-titled debut album will be issued on 5 June on Palmetto Records.