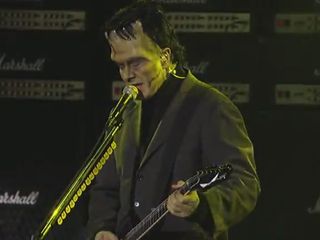 Dave Mustaine - no, really - puts on his best TV face

Megadeth's brilliant new album TH1RT3EN was issued today (1 November), and somewhat coincidentally (or not), the band just announced that they would re-launch Gigantour in 2012, with Motorhead, Volbeat and Lacuna Coil joining them on the road.

Gigantour begins a US trek 26 January in Camden, New Jersey and is set to wrap 28 February in Denver Colorado. For a full list of dates, click here.

In other Megadeth news, the group paid a visit to the Jimmy Kimmel Show in Los Angeles last night. As seen in the above video, caught up in the Halloween spirit, they donned costumes and makeup. Dave Mustaine was the Frankenstein monster, bassist Dave Ellefson was the Werewolf, guitarist Chris Broderick performed as the Phantom of the Opera and drummer Shawn Drover was Dracula.