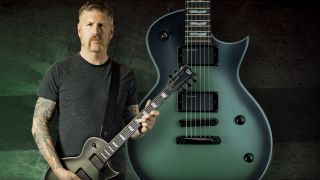 Just two years on from the release of his last Gibson signature guitar - the Halcyon Les Paul - Mastodon tonehound Bill Kelliher has joined the ESP roster and announced the release of two new guitars with the Japanese guitar titan.

The ESP Bill Kelliher and more affordable LTD-BK-600 are based on the classic ESP Eclipse single-cut outline, and pack mahogany bodies with full thickness and no waist cut, plus mahogany necks, ebony fingerboards and 24.75" scale lengths.

"Working with ESP has been a breath of fresh air," says Bill. "When I first set eyes on this guitar, I couldn't wait to play this mean-looking weapon of sound. After plugging it in and cranking it up, I couldn't put it down. What a great piece of work!"

Bill's not the only Mastodon member to secure a signature model this year, of course, after bandmate Brent Hinds landed himself an Epiphone Flying V Custom back in April.