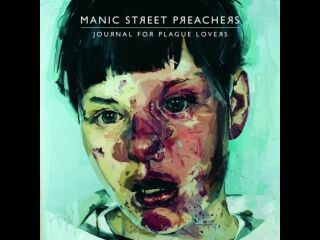 The Saville work in question: inappropriate?

The cover of the new Manic Street Preachers album, Journal For Plague Lovers, will be censored in some British supermarkets after its artwork was deemed "inappropriate".

Tesco, Sainsbury's, Morrisons and Asda are among supermarkets opting to display the album in a plain slip case so as to mask the original artwork - an oil painting by British artist Jenny Saville - which depicts a young boy/girl with an apparently bloodied face.

"We felt that some customers might consider this particular album cover inappropriate if it were prominently displayed on the shelf," said Nicola Williamson, Sainsbury's music buyer.

The Manics, however, contest the 'blood' interpretation of the painting.

"It's her brushwork," frontman James Dean Bradfield told BBC 6 Music. "If you're familiar with her work, there's a lot of ochres, browns and reds and perhaps people are looking for us to be more provocative than we are being."

Intentionally provocative then? Probably not. But Journal For Plague Lovers is likely to be notably different from the band's more recent, accessible work. It will be the Manics' first album since 1994's The Holy Bible (which also featured artwork by Saville) to feature lyrics predominantly written by ex-bandmate Richey Edwards, who disappeared in 1995.

Journal For Plague Lovers hits the shelves on Monday 18 May.

If you're shopping in Asda, you'll find the censored Manics sleeve sitting alongside the self-titled album by Fleet Foxes, the cover of which - a 1559 painting by Pieter Brugel The Elder - has detail of a man shitting in a river where people play.