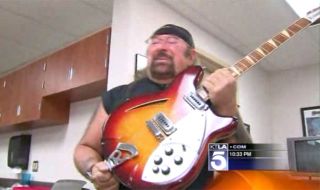 Wally Welch with his beloved 1969 Rickenbacker 360

Here's a tale with a (relatively) happy ending that should prove inspiring to those you that have had gear stolen. A California-based musician, Wally Welch, has managed to track down his 1969 Rickenbacker 360 17 years after it was stolen from him.

According to Los Angeles news site, KTLA, Wally bought the instrument in 1969 and played it with his band JP from then on. Unfortunately, thieves broke into Wally's storage locker and took the guitar, not to mention a host of other vintage synths, amps and music-making gear in 1996. A loss which hit Wally pretty hard.

"I stopped playing there for a while, for a few years, I just couldn't," he told the broadcaster.

The following years were spent regularly checking pawn shops and music stores, and then after the emergence of online auction sites, checking the likes of eBay and Craig's List on a daily basis. Unbelievably, two weeks ago, Wally's dedication was rewarded and he found the guitar online, listed for auction via a UK broker.

Wally then contacted Orange County detective Mikes Starnes and the US law official took to the phones to negotiate its return.

"I tried to negotiate with the auction house," Starnes told press. "I explained to them about their situation. They're older, they're retired. They don't have access to a lot of funds."

The auction house agreed to let it go for the opening bid price, plus shipping (a not inconsiderable $5,200), which Wally has managed to finance with an interest-free loan.

The musician was finally reunited with his lost guitar on 9 October, almost 44 years to the day from when he first purchased it. As Wally told KTLA, "Never give up looking for your love!"