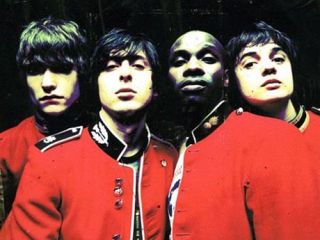 It's official. The reunion that at least two members of the MusicRadar team are very excited about has been confirmed. The Libertines - Pete Doherty, Carl Barât, John Hassall and Gary Powell - are set to reunite to play the 2010 Reading and Leeds Festivals.

And MusicRadar can bring you an interview exclusive, courtesy of our sister title, Rhythm magazine, who spoke to drummer Gary Powell last night, Monday 29 March.

Powell said: "When all's said and done about The Libertines, we were all only really ever in it for the music, that's why everyone in the band is still doing something. Whether the four of us would ever get together again, I never knew. Although we never fell out. Everyone still liked each other. We had problems, but we just didn't want to address those problems.

"It was kind of written in the stars that we would get back together, but how up until now that was going to be achieved, I didn't know and I still don't even know how it has been achieved now!"

To read the full, exclusive interview, head over to the Rhythm magazine blog. Elsewhere frontman Pete Doherty has described the reunion as "potentially a fucking disaster."

That said, we can't wait. Here's why: