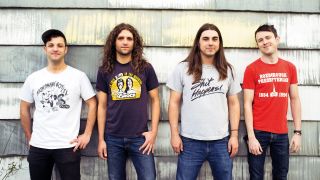 Think stomping left-field Southern rock with lo-fi garage swagger, a fuzzed up twin-guitar assault and sharp, poetic lyrics to boot. It's certainly no surprise to hear that Lee and his crew have been widely tipped to be the next great rock 'n' roll band to break their way out of the Southern states.

The outfit have been together for just four years - although there have been line-up changes along the way - and released their first long-player, There Is A Bomb In Gilead, back in 2012. Production-wise, Dereconstructed definitely stands out from its more slick-sounding predecessor, and Lee tells us that was the band's objective all along.

"We cut it really quickly to keep that sort of raw, spontaneous vibe," enthuses frontman Bains, who chats to us over the phone from the US, where the band are currently gigging with Alabama Shakes.

"The first one was influenced by a lot of the Stones late 60s stuff, plus Hi Records and Stax Records stuff, which I still of course love, but I think over the last couple of years of playing shows, it's become pretty apparent that that's not what we really sound like. We're just a wide-open rock 'n' roll band and the guitars are very loud. We hear about it all the time from sound guys!"

The album's 10 tracks were laid down in just four days of tracking at a Nashville basement studio belonging to a good friend, recording engineer Jeremy Ferguson.

"His basement just had concrete walls and a concrete floor with a low ceiling and exposed pipes and stuff," says Lee.

"There's a lot of sound reflection going on down there and I think it wound up sounding pretty weird, you know, but in a cool way."

"Tim Kerr has done so many great records that have that raw feel and have raw performances on an arrangement level," explains Bains.

"Tim's stuff really has that thumbprint of immediacy to me, like early rock 'n' roll, so I knew that I wanted him to produce it. I wanted the sound to be loud, but not compressed loud. I wanted it to be loud and abrasive and to sound like one of our shows the best I could."

Kerr also played a key role in scoring the band a deal with none other than Seattle's Sub Pop label. The reality of that sequence of events still hasn't fully hit home for the guys.

"I asked Tim if he could think of anybody to send records to, and I really just had one label in mind, and he said 'Yeah, I can send it to them... and I can send it to Sub Pop, too,'" recalls Lee.

"And I said, 'Man, that would be cool but don't worry about it, don't waste your breath, they're way out of our league.' But Jonathan Poneman at Sub Pop was the first person to get back and he said he really liked the record. I was like, 'Holy f **k!'

"After we signed the contract, we drove around with it on the dashboard like it was a holy relic or something! We are all really stoked about that, because they've put out so many great records."

Lee - who holds up Jimi Hendrix and The Allman Brothers' Duane Allman and Dickey Betts as some of his all-time favourite players - plugged his trusty late 90s Gibson SG '61 re-issue into a mid-60s Fender Super Reverb amp across the recordings.

He also has a Boss overdrive and another distortion pedal he can't remember the name of, although he doesn't use them too much for his characteristic fuzzed-up tone.

"Basically, I just turn the volume all the way up," he explains. "I only use the gain on them a little bit." The Glory Fires' other guitarist, Eric Wallace, played his Les Paul Studio, twinned with a Fender Bassman with two 4x12 speakers.

For a band that regularly clocks up 200 gigs a year, it's surely inevitable that we're going to see Lee Bains & The Glory Fires burning British eardrums live sometime soon. Sadly, however, it seems we're going to have to wait just a little while longer...

"We're playing a festival in Poland and some shows in Scandinavia in August, so I was hoping that we'd just be able to hop over to the UK - but I don't think it's going to pan out, until maybe 2015," says Bains.

"We've never played in the UK or in Southern Europe before, so we're all really itching to do that."