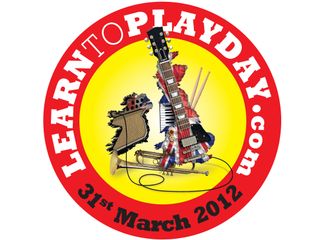 The third annual National Learn To Play Day, on Saturday 12th April 2014, will be offering even more free instrument "taster" lessons to the general public than ever before.

It's estimated that 15 million people in the UK would like to play an instrument or would like to start playing again. National Learn to Play Day is the ideal way to get back to music and be inspired to get playing.

The event is organised by Music for All, the charity of the UK musical instrument industry who will be working hand in hand with its partners, instrument manufacturers, music shops and other venues, celebrities, musicians and many more to encourage anyone and everyone, young or old, to join in this amazing musical learning experience.

Jools Holland as Patron of the Music for All charity said 'I am delighted to lend my support to the National Learn to Play Day. This is the day when we offer the general public free music lessons in musical instrument shops and other venues throughout the United Kingdom. Whether you used to play or whether you have always wanted to play… this is the day for you. I am delighted to be able to help Music for All in their quest to inspire more people to participate in music making.'

The 2013 event saw nearly 100 music shops take part across the country, delivering more than 10,000 free lessons to the public. Previous events have seen celebrities like Al Murray and Harry Hill, musicians including Nick Mason (Pink Floyd), Ian Paice (Deep Purple), Doug Aldrich, Brain Tichy and Michael Devin (Whitesnake), Bill Bruford (Yes), Ralph Salmins (Robbie Williams) appearing at their local stores to give music lessons. Check with the website below to find your local participating venue and to see what events they have planned and which celebrities, musicians and local dignitaries will be supporting them.

The charity is also proud to have partnered again for the event with the Musicians' Union who will be holding Learn to Play Day events in partnership with the Music Hubs and the MU Hub representatives,the Arts Council England's Take it away scheme, MusicTeachers.co.uk and Musicradar.com

Grab your diary and make sure National Learn To Play Day is in it on Saturday 12th April 2014!

Full details of the event can be found at www.learntoplayday.com