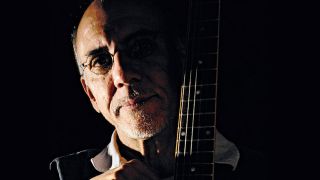 "For 15 minutes before I go on stage, I have the guitar in my hand, playing"

1. What was your first guitar, and when did you get it?

"The first guitar that I played belonged to my mother when she was a teenager, because she played guitar in south-eastern Oklahoma when she was growing up. She played rhythm guitar, and her father played the fiddle - and they would play at some of the local dances and at church. That guitar had no name on it - it was an acoustic."

2. The building's burning down - what one guitar from your collection would you save?

"I have a '51 Telecaster [technically a 'Nocaster' at that date, but we'll let Larry off! - Ed]. My technician at the time was Dave Rouse - but he'd heard The Rolling Stones wanted another tech for their tour in '88. So, Dave came to me and said, 'Larry, can I take a year off to go out with The Stones and make this really good money?' and I said, 'of course'. Well, he's still with the Stones! Anyway, at a soundcheck for the Stones, somebody brought this '51 Tele for Keith to look at. But Keith didn't need another Telecaster, so Dave told the guy 'Larry might be interested in it'."

"In the last couple of years, I've switched back to what I used to use, which is a Fender-style heavy pick - but I use the rounded edge, not the point, just for tone."

5. What strings do you use?

6. When was the last time you practised, and what did you play?

"Probably a month ago. I'll often just go down to my studio with my iTunes and start picking different styles of music, just to move my fingers and try to get my technique back - because I didn't play a lot last year. I just pick things, like some Joe Pass - and get frustrated because I can't play as good as him - and then some blues, something with some chord changes, just to get my fingers and brain co-ordinated."

7. What's the worst thing that's ever happened to you onstage?

"In 1999, I was hired in Nashville to play the National Anthem for the big college football game between Alabama and Tennessee. I thought I would put a little loop behind it and have my keyboard player accompany me. It was a catastrophe: it was a huge stadium, so the loop was bouncing around - my guitar was very low in the mix and it was mostly keyboard. About 15 seconds in, the kids started booing and then started singing the National Anthem on their own. It was so embarrassing."

8. What are you doing five minutes before you goon stage?

"For 15 minutes before I go on stage, I have the guitar in my hand, playing. I'm letting the muscles know that we're gonna go do this. I discovered years ago that by doing that, I'd never waste the first song."

9. And five minutes after?

"I'm probably having a gin and OJ and visiting with the guys, and we're all smiling [laughs]."

10. Is there a myth about you, or your guitar playing, that you'd like to set the record straight on?

"The melody of my song Strikes Twice is verbatim from a song that Johnny Smith recorded, called Jaguar. Well, I had that record as a kid, and when I wrote Strikes Twice I didn't know I had [unconsciously used] Johnny Smith's melody. But when I discovered it was a Johnny Smith melody, I called him and paid him royalties."