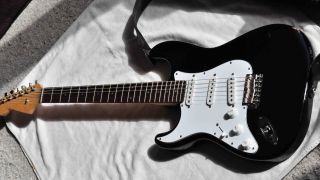 You don't tend to associate Kurt Cobain with the Strat, but he regularly abused Fender's pride and joy during Nirvana's tours in support of In Utero - and now, one of these very guitars is up for auction.

According to the CooperOwen listing, the seller was given the guitar by Kurt at the end of the 16 February 1994 show at Palais Omnisport, Rennes, France - by the seller's reckoning, these Strats were not actually played during Nirvana's 1994 European tour, and only used during the band's 1993 USA tour.

Kurt had five left-handed black-and-white Strats shipped out to him for the 1993 dates, because Fender were, as the seller puts it, "scared he would otherwise smash his new Mustangs".

Intriguingly, the listing also notes that Fender originally claimed these guitars were Made in Mexico, but it was later discovered that all left-handed Fender guitars from 1991 to 1996 were actually Made in Japan.

Aside from the neck, neck plate and strings, all of which were broken during Kurt's performance and replaced by tech Jim Vincent, all parts are original. The only exception is the Gotoh machine heads, Kurt's preference at the time.

Of the five Strats played on the 1993 US tour, "two were destroyed beyond repair", one was unused and one is owned by Vincent. You can see Kurt in action with one of the Strats at MTV's Live and Loud gig in Seattle below.

For more info on Kurt, check out our guide to his key guitars (smashable Strat not withstanding) and the strange story behind his Fender Jaguar…