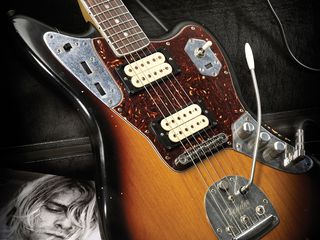 Kurt Cobain's famous 1965 Jaguar is shrouded in mystery. It was bought through an advert in the LA Recycler in 1991, and had already undergone heavy modification, including an extra volume pot, three-way pickup switch and dual humbuckers.

The seller was thought to have been a professional musician, due to the fact that the guitar came in a tour-ready Anvil flight case, however the previous owner's identity has remained lost, until now.

Posting on the Telecaster Discussion Page forum, a user by the name of 'Blazer' seems to have revealed the owner to be Martin Jenner, guitarist for Cliff Richard and The Everly Brothers.

Blazer stumbled on the discovery after spotting a familiar-looking Jaguar on a documentary, and also posted a live Cliff Richard performance from 1980. The guitar can be seen quite clearly at 29:27 to have the famously unusual third volume pot, three-way toggle switch and humbuckers.

The Jag in question

There are a few differences, though. Kurt's guitar featured a neck with 'dot' inlays, plus a Strat-style headstock and black chrome Gotoh bridge, however given that this video was a full decade before he bought the guitar, there's every chance that the modifications were made after it was shot.

Of course, this doesn't mean that Cobain actually purchased the guitar from Jenner, there could have been another owner in-between. However, Nirvana bassist, Krist Novoselic tweeted about the guitar, adding that "…it makes sense that it's the same axe".

So, could it be that Cliff's guitarist had a hand in creating some of the most commonly applied guitar mods in alternative rock? If not it's certainly a big coincidence!