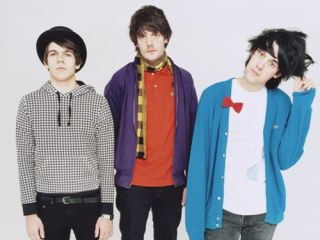 Mercury Prize winners Klaxons have revealed that their new album may not be released until 2010 - because they haven't got anyone to produce it.

Speaking to BBC 6 Music, the band's Jamie Reynolds said: "We've now got 28 songs and we're just about to put it together as a complete record. We're looking for a producer and if anyone out there makes records, give us a bell.

"We'd really like to put out the first great record of the 2010s rather than the last great one of this decade. Now that's become an aspiration and a goal."

The process of creating a follow-up to 2007's Myths of the Near Future has been far from smooth, with reports suggesting that initial recordings were rejected by Klaxons' record label.

However, Reynolds has suggested to 6 Music that things are now back on track: "We've taken it to the next stage and it's rawer and simpler and as we were at our best. We've stripped the complication and we're back to being raucous."

Klaxons will road-test the as-yet-untitled new album at gigs throughout 2009.