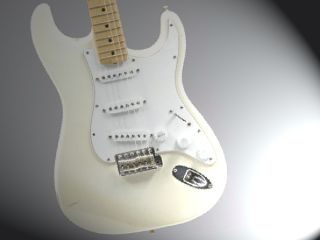 Back in 1990, I was editor of Guitarist magazine but had previously been Fender's UK guitar repairer.

When Fender launched an Artist Centre in a famous London rehearsal complex they asked if I could help by setting up all the guitars for the prestigious opening.

Fender's Artist Relations manager said there was one other instrument he'd like me to look at. This turned out to be Hendrix's most famous guitar - the white 1968 Fender Stratocaster that Jimi had played at Woodstock in 1969.

Mitch Mitchell brought in a guitar case and nonchalantly opened it. The Stratocaster had been in the drummer's possession since Jimi's death in 1970 and this was the first time it had seen the light of day. Just glimpsing the thing was a 'Spinal Tap' moment of epic proportions. Mitch said it needed looking at because the frets had tarnished, the strings were rusty and he had decided to put it up for auction.

I picked up the guitar and couldn't really believe it. I had watched Jimi play Star Spangled Banner on it in the film of Woodstock, and now it was in my hands. I studied the icon closely.

The nut had been switched around in its slot to accommodate Jimi's upside-down stringing method; it had a separate maple fingerboard (something Fender did for a short time in the late-'60s); cigarette burns were evident on the headstock (Jimi would secure his cigarette under the sixth string, and when he went off on an extended solo it would burn down to the stub); and there was staining from his shirt on the creamy-white finish.

The strings were indeed rusty and the frets had gone a bit green. Interestingly, the spotted cat-fur strap (ocelot, I think - very non-PC today) was still in place. We later checked clutches of spots on the unfortunate feline's hide against photos of Jimi, and it was clearly one and the same.

Hendrix didn't wear this strap at Woodstock; it seemed he changed it, as later photos (including the one on Guitarist's September 1990 cover) tend to confirm.

Why didn't I keep the strings?

Taking the guitar to my workbench I checked the neck for straightness and it needed a slight tweak of the truss rod. That done, I cut off the strings and threw them in the bin. Isn't hindsight a wonderful thing? Today they alone would probably be worth £50,000 (with Jimi's DNA all over them)!

Having cleaned the whole guitar and polished the frets the next step was to restring it and set the action. It was weird to realise that the last person to do this might well have been Hendrix himself, as there are well-known photos of him doing it backstage before a gig.

I threaded each string through the guitar's tremolo block, over the individual saddles, up over the reversed nut and onto the 'F'-stamped Kluson tuners. It didn't need a lot more doing to it, but I tweaked the saddle heights, made minor intonation and pickup adjustments and that was it.

I did plug it in to an amp, but as I am right-handed and it was strung upside-down, a quick Little Wing was out of the question so I simply played a few notes to check that the electrics worked.

In a final twist, I wrote up the guitar's story for Guitarist magazine and postulated that it might make £100,000 at auction. Having been asked to submit the article to Fender for their perusal prior to publication, it was suggested I reduce my estimate to £10,000, as the original figure was unthinkable to Fender.

Since then the Woodstock Strat has changed hands again. Today it sits in the EMP museum in Seattle, Hendrix's birthplace.

It's never been confirmed, but many reports suggest Microsoft's Paul Allen (the software company's right-hand man to Bill Gates) paid more than $2m for this guitar a decade ago...

So I shudder to think what Jimi Hendrix's Woodstock Stratocaster is now worth. But I'm proud to say that in my own small way I might have contributed something to rock guitar history…