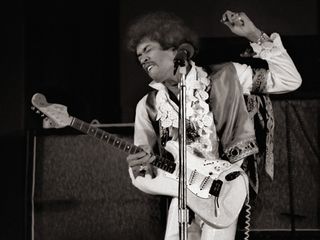 Jimi Hendrix, appearing soon at the Jiffy Lube Center? Hey, it could happen!

Just because your favorite rock stars are dead doesn't mean you have to miss out on seeing them in concert. In the wake of the Tupac Shakur hologram 'performance' that caused a sensation at the recent Coachella festival, estates of other deceased music stars are exploring the possibilities of similar events, possibly on a grander scale.

According to Billboard, fans could very well be treated to concert performances and even tours of 'virtual' rockers such as Jimi Hendrix, Elvis Presley and Jim Morrison. Even the estate of Marilyn Monroe, the actress who was known to turn in a musical performance or two in her time, is investigating the hologram option.

Jimi Hendrix's sister Janie, who is president/CEO of Experience Hendrix, confirmed that she has been working with the London-based company Musion Systems to create a virtual version of her late brother. However, she stressed that "for us, of course, it's about keeping Jimi authentically correct. There are no absolutes at this point."

More of an absolute could be coming from the Doors camp. According to the band's manager, Jeff Jampol, he's been working on a idea to present a 'virtual' Jim Morrison concert (one featuring the band) for nearly eight years. "We're trying to get to a point where 3D characters will walk around," he said. "Hopefully, 'Jim Morrison' will be able to walk right up to you, look you in the eye, sing right at you and then turn around and walk away."

As for The King, he might be entering the building sooner than you think. Digital Domain Media Group, the company responsible for creating the Tupac hologram, has inked a deal with Core Media Group to produce a variety of 'virtual' Elvis holograms for events that could range from concerts to tours and even residencies.

What do you think of deceased rockers being brought back as holograms? Are there any music stars you would pay to see in 'virtual' form?