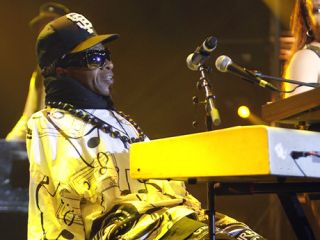 Sly Stone will serve no album before its time. Obviously - it's been 29 years since his last release. Though there have been hints of a new disc in the past, nothing has materialized... until now. On 16 August, Stone will finally - finally! - issue a brand-new recording.

Well... almost. I'm Back! Family And Friends is indeed a "new" album, but most of its 11 tracks are reworkings of Sly And The Family Stone's classic hits. Not to say that there aren't surprises to be had. The Rock And Roll Hall Of Famer and funk legend welcomes a pile-on of superstar guests on a majority of the cuts, including Jeff Beck, Johnny Winter, Bootsy Collins and Doors keyboardist Ray Manzarek, among others.

Check out a brief audio clip of (I Want To Take You) Higher featuring Jeff Beck.

Tracklisting for Sly Stone's I'm Back! Family And Friends