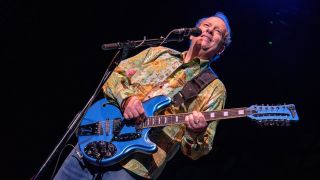 Hot on the heels of its new Modena Challenge electric, Italia has announced a signature model for Beach Boys guitarist Jeffery Foskett, the ITJF12.

Most notable among the 12-string electric's features are the wealth of controls for the Wilkinson WPM mini-humbuckers, which include master volume, tone and blend controls, plus individual on/off switches with LED indicators, as well as a FosQ enhancer switch and associated jangle and boost controls.

"I've played thousands of shows and hundreds of guitars in search of 'my' sound", says Foskett. "I wanted the jangle of McGuinn's and the smoothness of Carl Wilson's tones, along with a few other features I've always dreamed about."

With all those controls, this one looks like fun, fun, fun. The Italia ITJF12 Jeffery Foskett Signature is available now for £999.