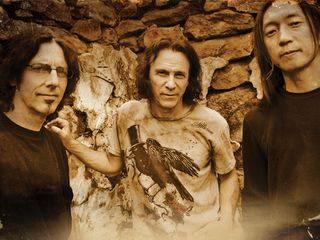 Prog rock without all the prog. The Jelly Jam are: (from left) Ty Tabor, Rod Morgenstein, John Myung

"We get together and explore," says Dregs drummer Rod Morgenstein of The Jelly Jam, his much-pedigreed musical triumvirate that also includes Dream Theater bassist John Myung and King's X singer/guitarist Ty Tabor. "With us, there's no pressure, no deadlines, no restrictions. We do what we want."

No pressure? No restrictions? Sounds pretty free-form. But when you consider that the average length of any given Jelly Jam song is three and a half minutes, Morgenstein's comments are more than a little surprising. Couple this with the fact that Dream Theater, King's X and The Dregs would hardly qualify as the kind of corporate hit machines that virtuoso players have to take refuge from to kick out the, uh, jams. And therein lies the secret to The Jelly Jam: they're a pop band in reverse.

"Most guys play in commercial bands so they can do something more adventurous," says Tabor. "With Jelly Jam, we play tight songs because that's what we want to do. And it's incredibly challenging. In a way, we don't make any sense. But we have a blast, so it's all good."

The origins of The Jelly Jam date back to 1997, when the band was a quartet that also featured onetime Dream Theater keyboardist (and current Black Country Communion member) Derek Sherinian. Sherinian split after two records, but the others stayed in, chose a new moniker and issued their eponymous debut in 2002 and the inventively titled Jelly Jam 2 a couple of years later. Filled with muscular, quasi-grungy, hook-filled rock gems - think The Beatles hooking up with Led Zeppelin on their way to a Jellyfish (no relation) concert and partying into the wee hours with Soundgarden - those albums set the stage for the band's latest disc, Shall We Descend, a mature, enormously satisfying, gritty, emotional and tuneful set.

"It's the kind of record most people could put on and enjoy," says Myung. "But the biggest thing to us is, we like it. Even if we made this album and kept it to ourselves, we'd still be happy."

These guys must be on a crazy high all right - they've already started work on their next release. MusicRadar sat down with Myung, Tabor and Morgenstein at Myung's Long Island home studio while the three took a break from writing and demoing to get the skinny on how the low-key supergroup functions, how they view themselves, and whether they have to put the kibosh on their ginormous chops to make it all work. (Be sure to check out song Who's Comin' Now, from Shall We Descend, on the next page.)

What do you get musically from The Jelly Jam that you don't in your "day job" bands?

Rod Morgenstein: "I'm a little different from John and Ty because I'm not in any one band. I'm pretty amazed at how we can take a kernel or an idea for a song, and in one day it's an entire song all ready to go. I guess it's the freedom aspect of being in this band: We wake up when we want to, we get together when we feel like it, and then the music just starts. There's no plan, and that seems to work for us.

"It even happens when we're not playing. Last night, we were at dinner, and John brought up an idea for a drum track - he mentioned Lucy In The Sky With Diamonds. He pointed out the way Ringo played those three snare hits before he went into the chorus. What a great idea! And it was totally the right thing for the song."

John Myung: "For me, it's the spirit of how we go about everything, like what Rod and Ty were saying - the 'no pressure' aspect. Whatever we think is cool, that's what we do. It's a great outlet for me, too. I record snippets of everything I come up with, but you know...I need a place to put them. I need to play with other people, too. Musically, it's something I just need. So, working with Ty and Rod lets me get a lot of stuff out that I otherwise wouldn't.

"It's very gratifying. Last night, we were working on that song Rod was mentioning, and it was like, 'Oh my God, there's a purpose to all of this archiving I've done!' These ideas are becoming three- and four-minute songs instead of...files and things sitting around."

How do you know when an idea is right for Jelly Jam and not one of your other bands?

Tabor: "I don't write anything for King's X, and I don't write for Jelly Jam. I just write. When we get together, something will ring a bell and we'll know that it's right for us. It's very natural. Working with these guys is like going to band summer camp."

Myung: "I'd agree with what Ty said. The whole thing is very therapeutic for me. It breaks up the norm. To a certain extent, through our interactions with other people, you tend to get defined as being 'this' or 'that.' This allows me - and all of us - to be something else."

Do you find that a lot of fans are surprised at how accessible your songs are? Let's face it: some people aren't into prog rock, so they do have certain misconceptions about you guys.

Morgenstein: "I think it's wonderful to throw a curve at people now and then and put out a recording that's not like the stuff you normally would. I will say that, although the music we play is based on short songs with hooks and choruses, there's still a muso element to it. It might not have the blazing techo licks, but it's got a lot of musical depth. Maybe the casual listener won't pick up on it; the musicians can hear it."

That said, do you enforce any kind of "no big chops" rule?

Tabor: "There are no rules!" [laughs]

Myung: "Yeah, we don't have limitations. We're not doing this for anybody but ourselves. This is the music we like, it's the vibe we like, and that's all that matters."

Tabor: "We are playing to the songs, though. We're not showing off and trying to impress with our flash. We play what's required, but we're open to whatever happens. I guess we might try not to overplay, which strengthens the songs."

Now, John, the album was recorded at your place?

Myung: "That's right. In terms of sketching the songs, the writing and the rhythms and tracking everything, yeah, it was done in my studio, right in the basement. That's another great thing about Jelly Jam: it's increased my awareness of home-based recording. It's pushed me to use the gear I have in my studio and learn everything I can about it.

What kind of setup do you have?

"I've got Steinberg software, a Cubase platform, and I have some really awesome valve pre's that James Demeter made for me. I have Focusrite converters, and I'm using an RME Fireface 800 as the host. Just recently, I picked up a [True Systems] Precision 8, which is great for adding color and weight to the drums, a more transient flavor. So it's a pretty clean, concise setup.

"With two racks of gear, we're off and running. I use KRK monitors, which sound really good - the engineers I've worked with on Dream Theater records like them. Everything is comfortable, sounds good…it feels awesome."

Let's jump into some songs. There's a pretty cool storytelling aspect on Who's Comin' Now.

Tabor: "In general, things aren't what they seem - and I love writing like that. Sometimes I'll try to tell a story, and it'll sound like it's about a group of people or a relationship, but it's really not that way at all. I like to paint pictures without alluding to what the real inspiration was…if that makes any sense! [laughs]

"If somebody doesn't understand the story, I like that. The inspiration for Who's Comin' Now is something I don't really talk about. [pauses] Let's just say that it's not what it seems. But I am trying to deal with fiction in some way."

Halo In Hell - was that the result of a jam?

Tabor: "I don't think so. I think we worked that out part by part. Most of it is us dealing with our ideas and putting them together and resolving them. It's funny how our songs are a journey, but they're the result of us brainstorming in a circle. The first two albums were more about jamming. With this one, we thought things out more, put them together and took them apart."

Morgenstein: "A lot of the time, we'll start forming a song, put the pieces together, and that's when Ty will say, 'Oh! I know what the song is about now...'"

You've got some electronic percussion going on in this song, right?

Morgenstein: "There is some… [to Tabor] What's the song where I played something and you made it sound like a distorted loop?"

Tabor: "That would be…Barometric Reign."

Morgenstein: "That's right! I played a part and Ty messed around with it. He did a lot of cool things."

Tabor: "We were messin' around with guitar cases and cardboard boxes, trying to get the right sounds. It kind of goes from one place to another. We took an initial bassline of John's, and then we knew we had to write something around it."

Myung: "I recall we were working on it, and then Rod went to the bathroom. By the time he came back, everything had changed. He sat back down and we were like, 'Yeah, it'd be very satisfying to do something like this…'"

And it was all because Rod went to the bathroom! [Everybody laughs]

Morgenstein: "I timed it perfectly. My bathroom breaks are known to spark creativity." [laughs]

The song Ten is an instrumental, and it's a fairly lengthy one. C'mon, that had to come from a jam!

Tabor: "That was a jam, yes! [laughs] John had a bass part, and we knew it was the basis for something good. We rolled the tape and went for it. In fact, we edited it down to eight minutes and whatever, but the real deal goes forever. We jammed for a very long time."

Morgenstein: "That's going to be the single!" [laughs]

Ultimately, how would you describe the group?

Morgenstein: "Wait a minute... Isn't that your job?"

Myung: "I would say we're a great outlet to explore songwriting and to do something that gets us out of our normal routines. The vibe in the room is so inspiring. I listen back to what we record, and I feel that we really accomplished something."

Tabor: "To me, it's an entity that keeps evolving. I never know what it's going to be, and that's so exciting. It's a friendly retreat. I have no idea what we are, and that's what I like."

Morgenstein: "It's muso power-pop! [laughs] 'Pop' can be a misleading term, but I think we give people something they'll enjoy listening to. We give them something else, too. What that 'something else' is…that's up to them."