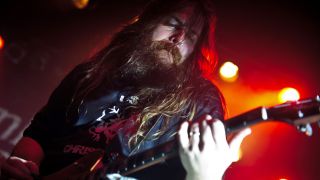 "The hardest part in all of this is the situation with Daniel," says Morton, speaking of a fan who died at a Lamb Of God show in 2010. "It's just a tragedy." (Image credit: Igor Vidyashev/ZUMA Press/Corbis)

"We're all really happy to get back on the road," says Lamb Of God guitarist Mark Morton. "It was pretty amazing to see Randy get off that plane and walk down the hallway at the airport. We were all there to greet him. This whole thing was dragging on longer than anyone thought it would."

The situation Morton refers to are the five weeks singer Randy Blythe spent in a Czech Republic prison this summer after he was arrested in connection with the 2010 death of a fan, Daniel Nosek, at one of the band's shows.

"When it happened with Randy, we were thinking, This must be some sort of complication," says Morton. [Blythe has denied the charges and has said that he would return to the Czech Republic should there be a trial.] "But then it went on and we thought, Geez, they can just do whatever they want. So we were so relieved to see him. We did a couple of shows with Slipknot this summer. It all put a new light on everything. You know the old saying, 'You don't know what you've got until it's gone.' It's true."

Starting 30 October, Lamb Of God will be back on the road - much to the relief of their fans, many of whom signed a petition created by one fervent follower on the White House petition site that called for Blythe's release - with the bands In Flames, Hatebreed and Sylosis.

Morton sat down with MusicRadar for a frank discussion about how he and the rest of the band handled Blythe's incarceration, his feelings on Lamb Of God's future and his concern that the death of one of the group's fans is getting "lost" in the media coverage surrounding the case.

During Randy's imprisonment, did you ever feel that the band's existence was in real jeopardy?

"I want it correctly said, because I feel, and we feel, that nothing should overshadow the loss of Daniel. Other than the fact that we feel that Randy is innocent of the charges that are being brought against him, there isn't a real feeling of us against them in terms of people who are looking for answers for Daniel.

"We're devastated by that. Unfortunately, that gets lost in us defending Randy publicly and us fighting to get him back home, and him fighting for his freedom, essentially, along with us wanting to get back on the road and on the stage in front of our fans. It's easy to lose sight of the fact that this is really about Daniel. I think about him every day. I hate that it went down the way it did, and I'd do anything to make it come out differently.

"That said, it's the heaviest part of all of this. I don't blame anyone for wanting answers, and I don't think Randy does either. In that sense, we were worried, and we're still worried, that Randy is going to be scapegoated for this and take the blame for things that he's not to blame for. It could possibly affect a lot of people. So yes, we were worried about this trial and how it could impact us as a band, our families, the families of our crew. But we're also very concerned about what happens to one of our fans at a show. That never should have happened."

You touched on this already, but has this experience made the band closer?

"I'm going to answer that honestly: While Randy was incarcerated, I think we were all working towards the same things in a big-picture way. There were some competing opinions about how things should be handled. Ultimately, it took us to hear everyone out and recognize that we had different ideas about how this should play out within the band, and then us deciding that we're going to listen to the people who know best.

"Did it bring us closer together? I think a big moment for us was when we decided to play those couple of Slipknot shows. If you saw us, if you watched us, we were running through our pre-show rituals… but there was a real moment when we took the stage. The eye contact and the connection to how we were playing and the way we were playing… and afterward, the joy we had coming off the stage. Everyone was impacted by this emotionally. It wasn't lost on anyone how special it was to be back on the stage again."

I have to imagine that the support you got from fans - and even people who didn't know the band; they just heard about the situation - gave you a lot of strength.

"It did. It was nice to see people show their support and rally around Randy. But it would be silly for me to say that I needed strength - I wasn't the one sitting in a jail cell in the Czech Republic. I was home with my family. But it was weighing on us quite a bit, and we needed answers to questions, as well. The support from our fans - and even people who weren't fans, as you said - was really special.

"There were some big names that came out, too. They didn't need that shit on their shoes, you know what I mean? They've got their own image and public perception to think about. Slash was very vocal about what was going on and how ludicrous he thought it was. There was David Draiman from Disturbed; the Osbourne camp issued a release; Rob Halford said some nice things. I don't want to leave anyone out... Sebastian Bach. There were some pretty big name folks who rallied around Randy, and that didn't go unnoticed, for sure."

As a psychological exercise, were you or the band working on any new music during this time?

"I did. We didn't get together as a band. All of us independently stuck real close to our families. The whole situation was really scary. So we went back to our families and got back to what's important. Slowly, I started writing. I know Randy has some stuff he was working on. But as a band, no, we didn't get together and jam, not until it was time for the Slipknot shows."

Have you started rehearsing for the upcoming tour?

"Actually, what we're working on is a video component that's going to be part of the tour. There will be video screens, and we're working pretty feverishly on that. We're doing a military tribute, which is going to be a really, really special moment in the show. We sent out kind of an open casting call asking people to send in pictures of their loved ones - their fathers, their brothers, their friends, their husbands - some of whom may have been killed in action. I have people close to my family who were killed in Afghanistan.

"Not that it wouldn't have been on our minds anyway, but my niece's father was killed just over a year ago in Afghanistan. It's pretty brutal what's going on over there. We wanted to do something to honor those guys. We put out a call for people to share pictures and stories and information on their loved ones who are serving. There's a portion of the show and in one of the songs where we'll showcase that.

"There's other things we're working on. We'll have different conceptual videos - Randy's filming some stuff for a song that's really close to him. There's a mountain of work left. Next week we have a band dinner, all the band members and their immediate families. Then we'll rehearse and get back out there."

When we last spoke, Resolution hadn't come out yet. How do you feel about the reaction to it?

"It seems to have nestled right in with the rest of the stuff. People accepted it and enjoyed it. For me, once an album is recorded and mixed, it's done. It debuted at number three, and that's a big deal for us.

"We wrote the album knowing we were going to play the songs live. We had been opening up with Desolation, and it's almost as if we crafted it to be a set opener. It works perfectly - people really respond to it. It's funny with that song - it was my cut-off point when I was writing for the album. We had enough material, and our producer, Josh [Wilbur], asked if there was anything else before we started turning the screws on the other songs to start recording. I was like, 'I'm done. I've got some other things, but nothing's of the caliber of the things we're working on.'

"[Drummer] Chris [Adler] reminded Josh about Desolation. I was like, 'Ahh, it's OK, but I just don't think it's as good as this other stuff.' I thought we should spend time on other songs. But Chris said, 'No way, man. I've been waiting for Desolation. Let's do it, let's do it, let's do it!' [Laughs] So I said, 'OK.' We brought it up as a band, and there you go - we're starting the set with it. Sometimes it takes somebody else to hear something that you don't. That's what's great about collaborating with people… and being a band."

Well, a lot of people who didn't get a chance to see you earlier this year are thrilled that you're hitting the road again.

"Thanks. You know, the hardest part in all of this is the situation with Daniel, obviously. I just don't want that to get lost in people's concerns for Randy or us as a band and what we're going to do. The biggest part of the story is Daniel. It's just a tragedy."