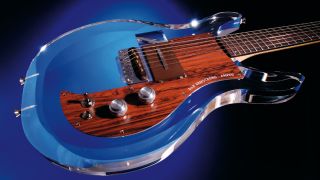 Keef fell in love with the Plexi for a reason...

It was during The Rolling Stones' 1969 US tour that Keith Richards was first spotted with an unusual guitar.

The double-cut apparition featured a body made of polymethyl methacrylate, a tough acrylic thermoplastic marketed under brand names such as Lucite, Plexiglas and Perspex. Designed by luthier Dan Armstrong, the guitar was initially known as the 'see-through' for obvious reasons. These days, it's better known as the 'Plexi'.

In 1968, Dan Armstrong - father of pickup guru, Kent Armstrong - was hired by US manufacturer Ampeg to give its existing guitar and bass range a good kick up the arse. Hatching a plot to produce an instrument with serious sustain and futuristic aesthetics, Armstrong opted to spec plastic as a body material instead of wood.

The innovations didn't stop there. The guitar's bolt-on maple neck featured a then-revolutionary 24-fret rosewood fingerboard, while Formica sheets - doyen of cheap kitchens - made up the faux wood scratchplate. The single Bill Lawrence humbucker could be installed and removed in seconds. Why? Well, Ampeg offered six pickup models of varying output to allow owners to customise the guitar's tone as fast as they could swap them over.

In truth, while Plexiglas provided impressive sustain, it wasn't a great substitute for tone woods. It was left to the pickup to hold up the lion's share of the tonal end - and there was no shortage of disciples of the guitar's trademark throaty roar.

However, it's the see-through monster that still bags the limelight. Featuring a few tweaks to update its performance (such as an intonatable bridge and better tuning stability), the sexiest part of the Plexi spec sheet remains as transparent as ever.

Production of the guitars ends... for now

A short run of Plesi reissues is produced