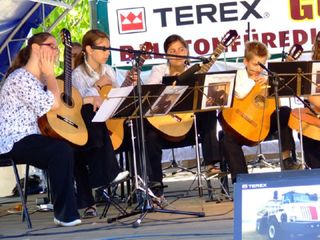 When a fourteen-year-old plays guitar for 53 hours straight and another guy takes the throne for an 85 hour drum marathon, you might think we've witnessed enough musical endurance for one week. But no, a group of Hungarian musicians have just finished performing a non-stop 216 hour concert - smashing 2007's Guinness World Record of 184 hours.

The concert was part of the Balatonfured Guitar Festival and involved more than 1000 musicians split into 350 groups. Classical guitarists, jazz, Latin, flamenco and rock musicians (and probably any other Tom, Dick or Harry capable of holding a tune on the triangle) lined up to take part for 10 days and nights.

Only one question remains: Was there an encore?