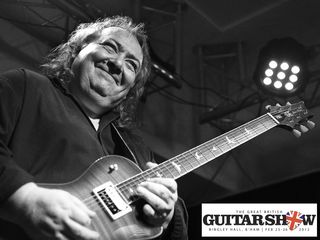 The organisers of the Great British Guitar Show have revealed details of the Live Stage line-up for the event, which takes place on 25-26 February at Birmingham's Bingley Hall.

In addition, TC Electronic demonstrator Peter Jeppesen will be showing the new TonePrint pedals, Marshall's new range will be put through its paces by Chris George and Rotosound invites visitors to step up to the plate and duel with fast-fingered Haydn Hewitt.

Show manager Jason Hunt said, "We're really pleased at the line-up for the first GBGS, featuring as it does some of the best talent the UK has to offer. Bernie is always a great draw and with his new PRS signature guitar just launched, we're really pleased to have him join us. He completes a group of artists that really do offer something for all visitors, whether they're fans of metal, blues or acoustic guitar playing."

Tickets for the Great British Guitar Show are priced at £10 in advance and are available from www.greatbritishguitarshow.co.uk.