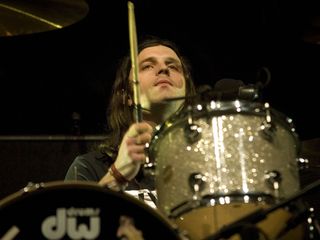 The war of words between Glee's Ryan Murphy and Kings Of Leon - particularly Nathan Followill (above) - took a most nasty turn this week. © Kirsty Umback/Corbis

Glee creator Ryan Murphy likes to get his way, and when Kings Of Leon refused to allow their hit single Use Somebody on the show, Murphy went ballistic, saying that the Nashville-based band were impeding "arts education."

Actually, he went further than that. In an interview with The Hollywood Reporter, Murphy let loose: "Fuck you, Kings Of Leon," he said. "They're self-centered assholes, and they missed the big picture. They missed that a seven-year-old kid can see someone close to their age singing a Kings Of Leon song, which will maybe make them want to join a glee club or pick up a musical instrument," Murphy explained. "It's like, OK, hate on arts education. You can make fun of Glee all you want, but at its heart, what we really do is turn kids on to music."

(For the record, it should be noted that Use Somebody was featured on the pre-teen-oriented Kidz Bop 17 collection in early 2010. The popular franchise packages versions of hit songs sung by children.)

Murphy's harsh comments took the band by surprise. Talking to The Hollywood Reporter, KOL frontman Caleb Followill said, "This whole Glee thing is a shock to us. It's gotten out of hand. At the time of the request, we hadn't even seen the show.... This was never meant as a slap in the face to Glee or to music education or to fans of the show. We're not sure where the anger is coming from. We just said no to a license for a TV show, which we do a lot."

The battle between Glee and Kings Of Leon escalated yesterday when drummer Nathan Followill, responded to Murphy personally via Twitter: "Dear Ryan Murphy, let it go. See a therapist, get a manicure, buy a new bra. Zip your lip and focus on educating 7yr olds how to say f---."

Murphy Tweeted back: "Just read Nathan Followill's Tweet…in which he implied I should 'get a manicure and buy a bra.' Wow. That's a homophobe badly in need of some education. I'm all for manicures, don't wear a bra. Would guess most gay dudes don't. But it's telling that Nathan can reduce a group of people to a mean-spirited cliché, in a time where young gay men are killing themselves all over the country because of hatred like this."

Which brought a prompt apology from Followill: "I'm sorry 4 anyone that misconstrued my comments as homophobic or misogynistic. I'm so not that kind of person. I really do apologize."

Meanwhile, Kings Of Leon aren't the only rockers to draw Murphy's ire. Turns out he's not too happy with Slash, either. The top-hatted shredder said in an interview recently, "Glee is worse than Grease.... When Grease came out I was like, 'Oh, c'mon, give me a break.' Actually, I look at Grease now and think, Between High School Musical and Glee, Grease was a brilliant work of art.'"

To Murphy, Slash's assessment of his show is apparently an indication of the guitarist's IQ. "Usually I find that people who make those comments, their careers are over," he said. "They're uneducated and quite stupid."