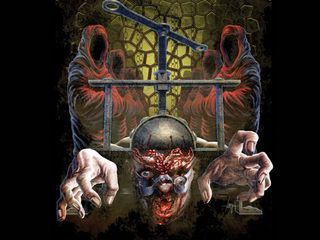 Megadeth have made Headcrusher, from their new album Endgame, available for free download until 16:00 BST today (8 July).

Speaking about Endgame, Megadeth leader Dave Mustaine says: "Thematically, I've never been known to be a silent bystander in a world that needs our participation. As more is revealed about our former President's legacy, a little-known yet staggeringly frightening document which was signed into law, named Endgame has been uncovered.

"The album Endgame is the most energetic music offering I have penned in over a decade and is far more believable than knowing someone signed Endgame - the document - into law.

"The album is also the perfect 'ass- kicking' music to listen to once you are done reading the aforementioned document!"

Endgame is due for a September release.