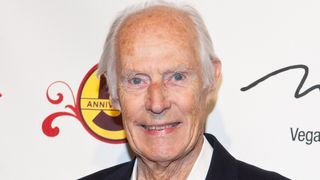 George Martin, legendary producer and the man behind The Beatles' sound has passed away at the age of 90.

Stars from all corners of the musical spectrum have paid tribute online to a man often credited as the fifth Beatle and one of the greatest producers ever. We'll be updating this page with those tributes as they come in.

Paul McCartney: "From the day that he gave The Beatles our first recording contract, to the last time I saw him, he was the most generous, intelligent and musical person I've ever had the pleasure to know." The full tribute can be read on Paul's Facebook page.

Peter Gabriel: "Really sad to lose George Martin, a brilliantly creative musical maestro who expanded what music was and could be"

Brian Wilson: "The records that George Martin made with the Beatles were some of the greatest ever made & they inspired me to greater heights. Love & Mercy"

Quincy Jones: "RIP to my musical brother George Martin. We were friends since 1964, & I am so thankful 4 that gift. Bless u & your precious posse 4ever."

Elton John: "So sad to hear about Sir George. It is the end of a wonderful era. He was a delightful, brilliant man. #RIP #GeorgeMartin"

Bon Jovi: "George Martin impacted music with contributions that will outlive us all. Sir George, WE Thank you."

Julian Lennon: "The Fifth Beatle, without question, and likely one of the best & most Iconic Music Producers of all time."

Bryan Adams: "Goodbye George Martin, thanks for producing the music that changed my world and everyone else's."

Midge Ure: "So dreadfully sad to hear Sir George Martin has died. One of the loveliest, most talented people I have ever worked with."

Sean Lennon: "R.I.P. George Martin. I'm so gutted I don't have many words. Thinking of Judy and Giles and family. Love Always, Sean."

Tori Amos: "George Martin was such a great musical visionary and his work will last for ever.....RIP George"

Max Richter: "So sorry to hear of the death of Sir George Martin. His work with The Beatles is why I'm a composer today."

Nigel Godrich: "George Martin, my hero. So sad. The definitive record producer. Such a gentleman and was so kind to me. He did it all first.. and best."

Scott Holiday, Rival Sons: "There's 'the best' and then there's 'the best of the best'. RIP Sir George Martin. Thank you for helping to blow our minds."

Andy Bell, Ride/Oasis: "Rest in peace George Martin and thank you for the music."

Mark Ronson: "Thank you Sir George Martin: the greatest British record producer of all time. We will never stop living in the world you helped create."

Dan Smith, Bastille: "https://youtu.be/JPyeqZNu_lo ...just one of many, many reasons why George Martin was brilliant and so wonderfully influential."

Pete Doherty: "And in the end the love you take is equal to the love you make. RIP George Martin sound of The Beatles #GeorgeMartin"

Tom Fletcher, McFly: "RIP George Martin. The albums he produced have influenced my life and career in so many ways and continue to do so."

Noisia: "George Martin was a genius."

James Bay: "Sad to hear about the passing of George Martin. Not many others have done so much for music."

David Arnold: "You won't find a single person with a bad word to say about George Martin. What a legacy to leave, everyone loved him. Let's all aim for that"

Gary Kemp: "George Martin was the Edmund Hillary of music - adventurer, explorer, discovering routes for pop music we have all gratefully trod behind in."

Dave Navarro: "Awww man! RIP Sir George Martin and thank you for the inspiration! My life wouldn't have been the same without you."