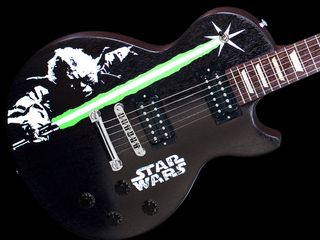 Star Wars creator George Lucas has customised a Gibson Les Paul with a Lightsaber-wielding Yoda for a fundraising auction. The one-of-a-kind axe joins others designed by the likes of Robot Chicken creator Seth Green and Marvel Comics' Stan Lee.

The auction takes place at the Phoenix Guitar Gala in Petaluma (USA) on 28 February. For Skywalker-fanatics unable to make the trip to California, fear not: you'll be able to bid online.

There'll be approximately 20 guitars up for grabs, all donated by Gibson and customised by a celebrity of varying fame. As well as the aforementioned three designers, others include Devo's Frank Schubert and Primus's Les Claypool.

All proceeds from the auction go to the free after-school program at the Phoenix Theatre, to aid the social development of young people. So, as always, dig deep.

You can check out the other designs as and when they are unveiled on the Pheonix's official site. In the meantime, you can see a whole bunch of new guitars from this year's NAMM show on MusicRadar's Live blog.