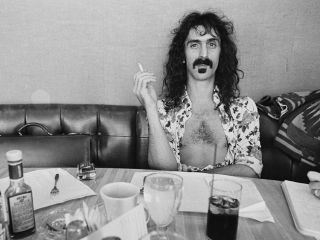 How did Frank Zappa get to Carnegie Hall? C'mon... (Image credit: Philip Gould/CORBIS)

Frank Zappa could make music with a bicycle, so why wouldn't he get to play Carnegie Hall? He did, of course - he and The Mothers Of Invention made their Carnegie Hall debut on 11 October 1971. And now that show and a second on that very same date will be issued on CD.

Make that four CDs, to be exact, as the sets Zappa and the Mothers (the '71 lineup included Mark Volman, Howard Kaylan, Ian Underwood, Don Preston, Jim Pons & Aynsley Dunbar) played were marathons. The shows were professionally recorded but never released, and over the years they've achieved mythic status amongst Frank-o-philes, who for years have traded bootlegs of the concerts.

The rendering of the Carnegie Hall recordings have been overseen by Gail Zappa, Frank's widow, who said, "We tweaked and we tweezed and did everything possible to be certain this does not sound like a breakfast cereal gone mad somewhere in the Van Allen Belt. I am happy to say The Mud Shark Legend Continues."