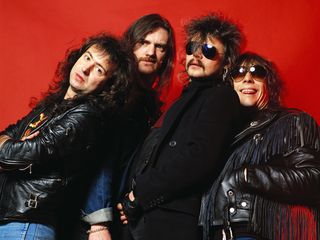 Former Motörhead guitarist Michael 'Würzel' Burston passed away yesterday, 9 July, at the age of 61. Several reports suggest that Burston died from ventricular fibrillation, which was triggered by cardiomyopathy.

The news was first reported on the Facebook page of Tim Butcher, the longtime bass tech forMotörhead leader Lemmy Kilmister. "RIP Würzel," Butcher wrote, adding, "Great guitarist and a complete gent... we will miss you..."

Prior to Motörhead, Burston served as a corporal in the British Army. He also played in the bands Bastard and Warfare. He performed with Motörhead from 1984 to 1995, appearing on the albums No Remorse, Orgasmatron, Rock 'N' Roll, March Ör Die, Bastards and Sacrifice.

Burston had played in several bands since parting ways with Motörhead. His most recent group, Leader Of Down, headlined the UK fundraiser 'Never Mind The Bullocks' in support of Midlands Air Ambulance last month.