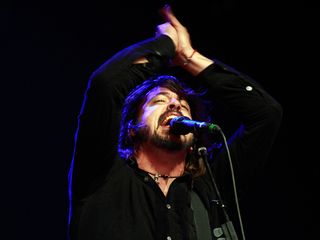 Dave Grohl is sending a big round of applause your way. © Lutz Müller-Bohlen/dpa/Corbis

By all accounts, Dave Grohl and the Foo Fighters have had some year. And Grohl knows it, too. The multi-talented musician took to the band's website today and posted an official "thank you" message to Foo Fighters fans across the world.

You've gotta love a guy like that. Here's Dave Grohl's message in full:

"Hey everybody, Dave here. It's been quite a while since I've sat down to write something for you guys, but as we're coming to the end of an amazing tour and an amazing year, I figured I'd take this opportunity to say thank you….

"Where do I begin?

"Thank you all for making Wasting Light the most incredible album experience of our band's 17 year history. For real. The fact that a rock and roll record, made in a garage, completely analog to tape with no help from computers, could be a #1 album around the world, AND get a Grammy nomination for Album of the Year…..well….these days that's no small feat. It's truly inspiring, and it makes us feel like the luckiest band in the world. So thanks. It means everything to us.

"And the shows……from the secret club gigs, to playing in peoples garages all over the country…..from the arenas to the festivals to the stadiums….we've had the best gigs of our lives. Thank you so much to each and every one of you who came out and spent those 2 hours and 45 minutes with us every night. It's been exhausting…..but it's been a blast.

"Looking back at the past 18 months, I don't think we've ever worked so hard at making an album, and it ever being so easy. From day one, the idea for this record was to make something completely simple and honest, to capture that thing that happens when you put the 5 of us in a small room. No big production, just real rock and roll music: That's why we decided to do it in my garage. We wanted to retain that human element, keep all of those beautiful imperfections: That's why we went completely analog. And, most of all, we wanted it to sound huge: That's why we decided to use Butch Vig. His role in this whole experience is huge, and he deserves a great 'thanks', too. Not many producers would accept the challenge that we handed him. He's the best, for sure. Together, we made the album of a lifetime. Again.

"And to all of you…..we're not finished yet. There are still more shows to play, more songs to write, more albums to record, for years to come. I mean…..If you would have told me 17 years ago that in 2012 I would be writing songs for our 8th studio album….well…..

"If it weren't for you guys, we wouldn't be here. We owe you so much. Take care of yourselves. We'll see you out there, folks. Dave"