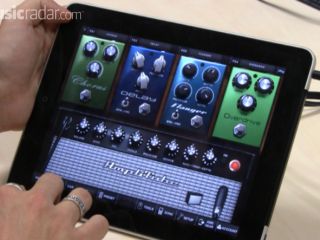 Will AmpliTube for iPad soon be a familiar sight on stages?

The world has been expecting a native iPad version of music making app AmpliTube ever since developer IK Multimedia 'leaked' some photos of it onto its Facebook page. But up until now, images and 'coming soon' promises are all we've had to go on.

That's all changed now, though, as IK recently delivered a pre-release version of the amp modelling/effects app to MusicRadar for hands-on testing.

Spec-wise, it's very similar to the iPhone app that we put through its paces a couple of weeks ago, but as you'll see in the video above, the iPad's extra screen real estate makes all the difference when it comes to usability. Where possible, we've concentrated on what's different about the iPad version, but if you want to hear soundclips from all 19 guitar amp and effects models onboard, go here.

No word yet on pricing and a release date, but AmpliTube for iPad should be in the App Store soon, and we wouldn't expect it to cost much (if anything) more than the iPhone version.