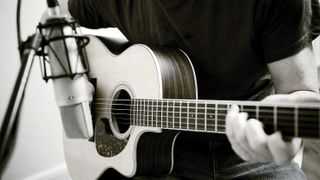 ACOUSTIC EXPO 2013: We've gone back to basics to help you get a great recorded acoustic guitar sound every time. Whether you're using a mic or going direct, these tips will take the pain out of getting your sound down.

Don't know where to start? Try this...

1. One mic and the truth

The simplest approach is to place a single condenser microphone around a foot or so away from the guitar, pointing roughly towards where the neck joins the body. This gives a good all round balance of sound from the body and neck. It's also worth trying a mic over your shoulder - that's somewhat similar to what you're hearing!

If you're after a bigger, more complete sound (for example, for solo pieces), it's worth adding a second mic. When recording for Guitarist magazine, we put the second mic the same distance as the previous mic, but this time positioned around the lower bout of the guitar pointing slightly back towards the bridge. As long as the signals from each mic are in phase, you can mix the different tonal characteristics to get the sound you like best. You could even pan them in stereo for huge spread. Again, you could try the second mic over the shoulder.

It's generally agreed that condenser mics do acoustic guitars better justice than dynamic types. A cardioid pattern, large-diaphragm condenser (such as the perennially popular sE2200a or perhaps AKG C 414) would be a good all-rounder. If you have a pair, so much the better. More specialist still would be one or two high-quality small diaphragm condensers; Neumann's KM 184 is a popular professional choice. You shouldn't discount a quality ribbon mic either, but they're even more specialist and often very expensive.

Three routes to getting your sound in...

Many modern recording devices - multitracks, software, iPads/iPhones - have in-built preamps that will work just fine. Attach a mic directly and just get going.

Most audio interfaces for computer recording include an in-built preamp. You plug your mic into the interface and bring the gain up to the required level. They often also include phantom power (for condenser mics) and a gain pad for very strong signals.

The professional studio choice is a standalone mic pre that sits between your mic and the recording console/interface. These vary greatly: for example the simple ART Tube Pre for around £59, right up to the Manley Slam!, seven grand's worth of stereo preamp excess. Some preamps also include EQ and compression sections.

Some onboard pickup systems are far better than others, but a direct piezo pickup output is rarely going to sound great on its own.

Acoustic legend Martin Simpson: "I tend to use a pair of stereo mics close on the guitar, then usually a big tube mic further off. I also always record my DI sound from the guitar's [Highlander] pickup so I can alter particular frequencies. I like a really crisp top end and a really big bottom end, but scoop the middle out of the DI sound because that's where the nasty bits are: that 'quack', urgh."

Nevertheless, mixed with a mic sound, it may put back in an element of strength and punch that could be beneficial to your sound. There's no harm in recording it as well, right?